To me, it’s an interesting footnote in locomotive history that Southern Pacific was quite a customer of Baldwin diesel road switchers, almost from when they were first introduced. Baldwin, of course, was eventually not terribly successful in the diesel locomotive market, but they had road switcher models before either Alco or EMD did. SP eventually owned over 80 of them, plus ten to T&NO (see Joe Strapac’s Volume 11 in the series, Southern Pacific Historic Diesels, “Baldwin Switchers and Roadswitchers,” Shade Tree Books, 2005).

And we know that they were used out of San Luis Obispo, according to Mac Gaddis, who worked there. For a portion of one of my interviews with him, see this link: http://modelingthesp.blogspot.com/2011/08/san-luis-obispo-operations-3.html ). The area of California that I model is only about 20 miles south of San Luis Obispo (for more about my layout locale, see: https://modelingthesp.blogspot.com/2019/08/conveying-ones-layout-locale.html .)

There was a Stewart HO scale model which was quite close to these early DRS-6-6-1500 engines, and my model was re-detailed, painted, crewed and given a decoder by Al Massi. Here it is passing the Shumala depot with the Guadalupe Local: 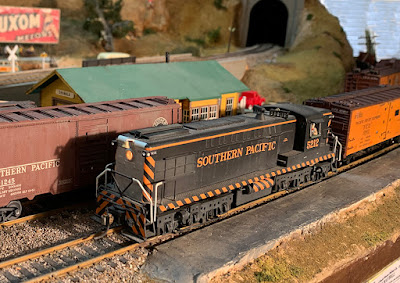 In 1954, after my modeling year of 1953, SP decided that these were really road locomotives, and the orange striping went away over the next four years, engine by engine, to be replaced with normal road power “Black Widow” silver and orange wings. Here’s an example, a photo at West Oakland in 1959 (Don Hansen photo). 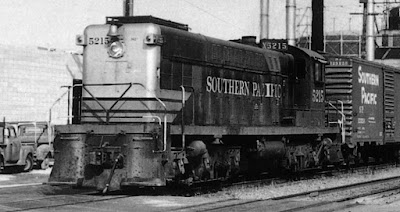 Apparently SP was pretty happy at first with the DRS 6-6-1500 locomotives, because in early 1950 they received 14 more, SP 5213–5226. Externally they were quite similar in most respects to the preceding group of locomotives; probably the most visible aspect for modelers is that they had dynamic brakes, with open grilles over the resistor grids in the short hood.

By the summer of 1950, Baldwin  upgraded this locomotive to 1600 horsepower with a new supercharger, and designated it as model AS-616.The first models produced went to SP, delivered from September 1950 to spring 1951, 28 units numbered SP 5228–5249. In the fall of 1951, SP began to take delivery of yet another order, this time 29 units, SP 5250–5278. Again, all were delivered with the modified “road” version of the Tiger Stripe scheme (aluminum ends), but in 1954, all began to be repainted into the Black Widow style of road service power.

I have a Hallmark brass model of the Baldwin AS-616 locomotive, with dynamic brake grilles on the short hood (as it should have), and I painted and lettered it myself, as SP 5249. Below it’s shown with the Surf Local returning westward to San Luis Obispo, here just passing the Shumala engine terminal. 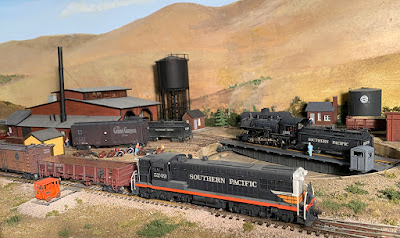 The trouble here is that this would be an awfully early repaint in my 1953 modeling year. This engine is a good puller, but I may sell it on, as not really correct for my era — much as I like the paint scheme.

We know that Baldwins were the only SP road switchers in the early transition era, and even by my modeling year of 1953, the Baldwins greatly outnumbered the first new orders for Alco and EMD engines of that type, which all arrived during 1953. So it’s essential that I have at least one in my layout operation. Heck, I may even need another one in Tiger Stripes to replace the 5249!