I have written a number of blog posts over the last decade that included mention of my previous layout (built when I lived in Pittsburgh, PA, prior to 1994) and its free-lanced short line, the Lompoc & Cuyama, that connected to the Southern Pacific main line. One such post, showing what had carried over to the present layout, is here: https://modelingthesp.blogspot.com/2012/03/survival-from-my-old-layout.html .

In the early days of layout construction in Pittsburgh, I tended to take black & white photos, so most of my “record” images are that way. I thought it might be interesting to show a few of these, both to show  progression over tie, and as a comparison to today.

The earliest dated images that I have are from the summer of 1984. The photo below shows Ballard as it then was. The layer below is staging, You can see the backdrop has a faint mountain outline sketched. The winery building is at left, about in its present location. The other structure, that would become Union Brass Foundry, is not placed at any trackside but is simply resting in the area. Obviously only a little track has been laid,. 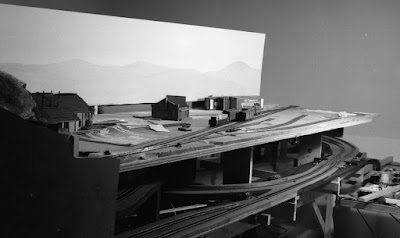 Two years later, in August 1986, things had progressed. The backdrop painting is partly completed. Though three structures are placed, only the winery is in the location it has today (there’s even a six-compartment wine car spotted there!). Some scenery treatments and fascia have been started. 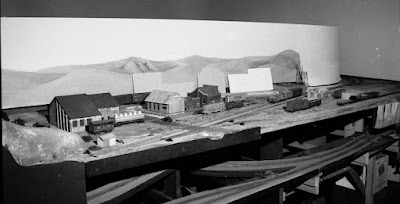 But the view above, showing the left side of Ballard is a little misleading; looking to the right of the photo, you can see that there is little there. Here is a closer view of that area. 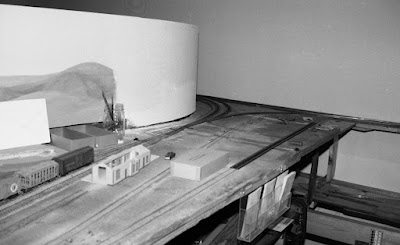 Clearly little has been done at this end. The depot roof hasn’t been created, and only a kit box stands in place of the eventual Guadalupe Fruit. Work has begun on a wye at the back of this area, but the connection toward the right of the photo, intended as the final town on the branch, hasn’t been begun. But note the bill box on the layout edge. Switching by the local freight train crews did take pace in this era, though the industry structures weren’t yet built.

In the spring of 1990, I did extensive layout photography for an article that was to appear in Railroad Model Craftsman (eventually in the June 1990 issue: you can see the cover shot here: https://modelingthesp.blogspot.com/2018/03/how-old-is-my-layout.html ). Below is an example. This looks pretty finished, and there are now two more industries, Peerless Foods and Nocturnal Aviation, along the backdrop. But note there are no foreground industries. At this time, what is now an SP branch was an imaginary short line, the Lompoc & Cuyama. 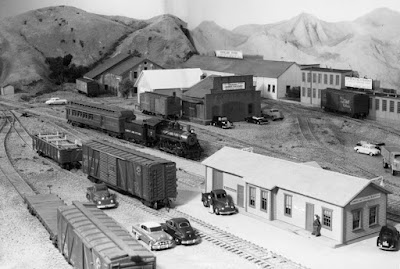 As one more demonstration that looks can be deceiving, here is a look in the other direction, toward the right-hand end of Ballard. To the right of the depot is a mock-up for  Guadalupe Fruit. Mock-ups of building flats line the backdrop. The stack of styrene blocks at the back, photo center, was part of a plan to disguise the wye tracks, but clearly little else has been done at this end of town. 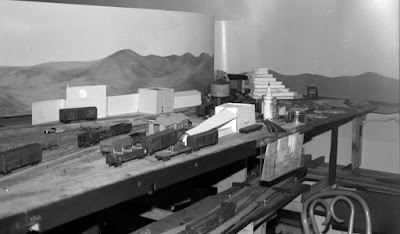 It is always interesting to look back and see where we’ve come from. These photos certainly demonstrate that. But not too long after the photo above was taken, the layout was dismantled, and the parts that could be re-used were moved to our new home in Berkeley, California. I will return to the development of Ballard in a future post.