In my usual operating sessions, I offer a mixture of steam and diesel motive power, as is entirely appropriate for my 1953-era layout. But I really enjoy steam engines, and accordingly sometimes reduce the number of diesels a bit. And this is not inappropriate: one reason for my choice of 1953 as a modeling year is that it was the last year in which steam was the dominant motive power on Southern Pacific’s Coast Division, which I model.

The weekend just past saw two operating sessions hosted on my layout, and the “extra” steam was mostly evident on the second day. On the first day, it showed up in mainline trains, passing across the layout on the Coast Division main.

The first of the two sessions on the weekend included former dispatcher Steve Gust (naturally nicknamed “Breezy”), and he was paired with John Sutkus. They are shown below working at Shumala, with John at left, looking perhaps a little startled. 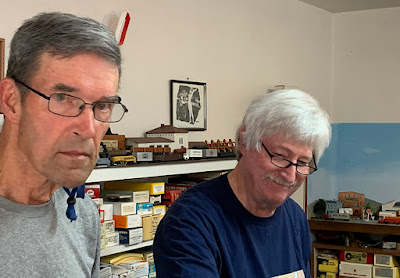 One member of the other crew was Jeff Aley, long-time clinic chair at the Cocoa Beach RPM meeting, and he was partnered with Seth Neumann. Below you see them switching at Ballard. Jeff, at right, seems to be making a point, but I don’t remember what it was. 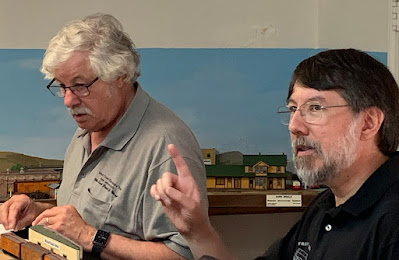 The following day Mark Schutzer brought a couple of steam engines, including an 0-6-0 to work Shumala in place of the usual diesel switcher. That’s part of the extra steam. Below, Mark is shown at left, partnered with Pat LaTorres, working at Shumala. They are studying the timetable to make sure of the time of the next mainline train. 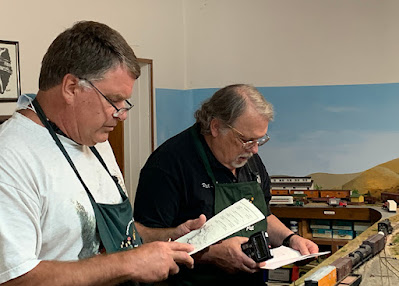 In the photo above, you can just make out the 0-6-0 on their cut of cars; below is a better shot of it, spotting the caboose for the Santa Rosalia Local. The locomotive ran beautifully and had no trouble doing all the work. 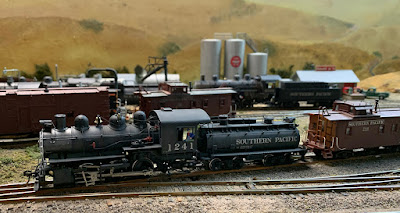 The second crew this day was Dave Falkenburg (below at left) and Jim Radkey. You see them here at Shumala, but like all crews in these sessions, they worked both sides of the layout in succession. 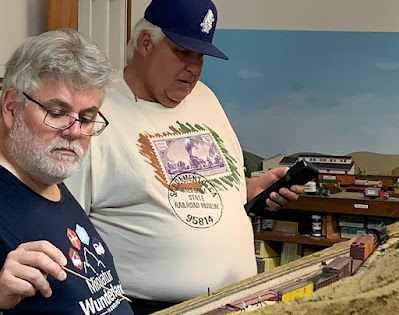 Mark also brought a steam engine to power the Santa Rosalia Local, an interesting choice of one of SP’s home-made 0-8-0 switchers, created by removing the lead truck from a Consolidation — exactly how Mark created his model. Below you see it backing across Nipomo Street in the town of Ballard. 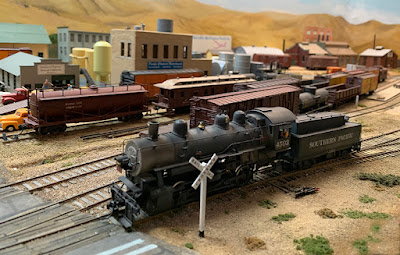 This was a pair of good sessions, with relatively few problems arising. It is always fun to get together with experienced operators who understand their jobs in sessions like these, and enjoy doing them. And of course sessions like these bring the layout to life, doing the work I designed it to do. I look forward to more in the future.

Posted by Tony Thompson at 3:30 PM