In the two previous posts I described why I want to add an additional locomotive to my layout fleet, for passenger moves; the criteria I chose; and (particularly in the second post) also discussed at some length the Southern Pacific prototype I wanted, the Class P-10 Pacifics. That second post is here: https://modelingthesp.blogspot.com/2022/06/choosing-passenger-locomotive-part-2.html .

My Precision Scale HO model of a Class P-10 is factory painted as no. 2485 (of which I showed a prototype photo in the previous post, link above). That sounds like the basic finishing is complete, but there are some rather obvious issues with the model as it comes from the box, even though the overall impression is nice. I show a side view below.

In the photo above, the skyline casing is evident, along with the big 6-wheel Class 120-C-8 tender, and the model is correctly lettered. But the wheels of the lead truck are almost obscenely shiny, and likewise driver “tires” and wheel centers are shiny silver (and even the screws holding the brake shoes), along with all rods and crosshead. Here’s a close-up: 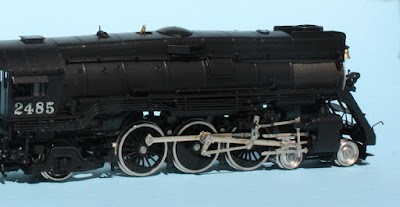 Needless to say, this is not how the prototype looked. Of course it’s true that many passenger locomotives, when freshly shopped, might have driver tires painted white, but those were narrower than the model — and the model tires aren’t white. More importantly, road grime very soon concealed any white paint of that kind.

My first step (after giving the entire locomotive and tender a coat of flat finish) was to brush-paint the lead truck wheels, and the offending driver parts, Tamiya “German Grey” (XF-63). I also dry-brushed the same color onto parts of the rods and other running gear. This is a first step in a more realistic appearance for this part of the locomotive. Wheel flanges remain shiny, but it’s a start.

My next step was to do a light weathering job on the entire locomotive and tender. By 1953, this locomotive was almost certainly based in the Peninsula commute pool, so would not have been allowed to get too grimy. There are photos as late as 1955 of quite clean commute locomotives.

I used a light wash made with acrylic tube paints, mostly Neutral Gray (for more on my acrylic wash weathering, see the “Reference pages” linked at the top right of this post). For the running gear, I’ve noticed a warm, yellow-brown color on prototype rods and crossheads, perhaps from the color of greases used. For that, I mixed some Raw Sienna and Burnt Umber. On the tender, a few streaks from occasional overfilling of the tender were included.

I’m happy with the look of the model at this point, and I only need to add couplers and cab crew for this locomotive to enter service on my layout. I’m looking forward to it!

Posted by Tony Thompson at 8:51 AM