The annual Railroad Prototype Modelers (RPM) meeting held in the San Francisco Bay Area has naturally been on hiatus through the pandemic, but on June 18, it returned at last. I have always enjoyed attending this event, the Bay Area Prototype Modelers (BAPM) meeting, and this was no exception. What a pleasure to see the familiar sign on arrival at our usual site in Richmond! 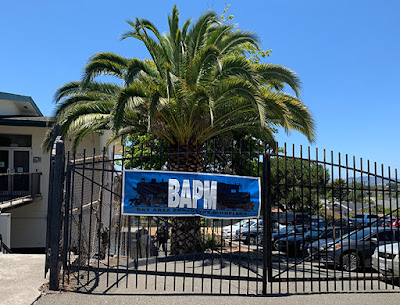 As usual, there were many excellent models on display, and I photographed a few that especially struck me for quality or distinctive treatments. For example, there was a group of box cars by Jesus Peña, who said he had never had the courage to try weathering, until he saw a Michael Gross video (and here’s a link to one of Michael’s articles: http://mrhpub.com/2017-01-jan/online/html5/index.html?page=154&noflash ) using artist’s pencils, and decided to try it. His results looked really nice to me. Here is one of his cars, a Class BX-37 box car, ATSF 141923. 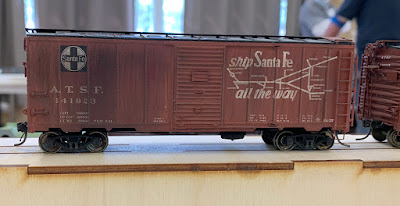 One example of a modern freight car treatment that I liked was by Robert Forsstrom, a grain hopper that’s not only gotten dirty, but has been patched and given new reporting marks, along with some graffiti. Very nice looking combination of treatments.

Another display I really liked was Richard Mitchell’s locomotives. In particular, he has used the Mantua/Tyco Pacific (essentially the B&O Class P-7e) as the basis for a number of railroads’ heavy Pacifics. Most receive new cabs, to get a prototypical shape and thin walls. Below is a striking example, the T&NO “Sunbeam” power, but in addition, he displayed a C&NW “400” engine, the streamlined B&O P-7d, a GM&O Class P-167, and the prototype, B&O P-7e.

Lastly, I want to show one of a very nice series of models “in progress,” always a most informative way to see the work that is done. These were by Rick Selby, and the particular example I show below is based on the SP 60-foot box cars of Class B-100-44, 100 cars built by Pacific Car & Foundry in 1978.

Rick began with the Athearn Genesis 60-foot FMC box car kit. Roof and ends were removed on a milling machine, and Cannon & Co. Plate C ends were added, then extended to Plate F height with styrene. The new roof was built with styrene to match the PC&F prototype. A nice looking model and as I mentioned, always interesting to see work in progress.

I will stop here, and will have more to show in a future post, additional models that I really enjoyed seeing at this year’s BAPM.