Although the staging tracks I have on my layout can’t accommodate realistic-length passenger trains, I do operate some trains of passenger equipment. One possibility, which I’ve discussed several times before (as one example, see: https://modelingthesp.blogspot.com/2012/11/modeling-sp-passenger-cars-coast-mail.html ) is the mail train on the Coast Route.

Another possible train choice is one of the occasional deadhead moves that Southern Pacific necessarily conducted to get passenger equipment from where it was surplus (or not assigned), to where it was normally assigned or needed. This would be mostly passenger cars like sleepers, but could of course be almost any car.

Part of any such operation, of course, is motive power, and in my 1953 modeling year, SP still powered its Coast passenger strains with steam, one of the last holdouts of the whole system. And the Coast Division included the Peninsula commute trains in the Bay Area, meaning that a number of the steam locomotives retained in that service were also used on other movements on the division. This permits some latitude in choices of steam passenger power.

A locomotive I have used on a number of my short passenger trains is an old Westside model, modified with improved detail, representing a Class P-4 Pacific. The P-4 class comprised 10 engines, nine of them from Class P-1 and one from Class P-3, rebuilt to more modern standards with Delta trailing trucks (the most obvious change), superheaters, feedwater heaters, new one-piece cast-steel cylinder blocks, boosters, and modified cabs. Most of these upgrades took place during 1927–1929.

These P-4 Pacifics had an old-fashioned look with their straight boilers, but the modernization of the 1928 rebuilding made them much more capable, particularly the installation of the booster, which added about 10,000 pounds tractive effort for better train starting. My model, SP 2402, represents an engine that was rebuilt to Class P-4 in August 1928. Here’s my model at Shumala: If anything, this is a bit of a small locomotive, since the prototype had only about 31,000 pounds tractive effort (without booster). Far more capable were the dominant passenger engines on the Coast by the 1950s, 4-8-2 and 4-8-4 power. These were quite a bit more powerful than the Pacific shown above; the Class Mt-4 engines, for example, had 57,500 pounds tractive effort, along with a 10,000-pound booster. This would describe my Athearn 4-8-2 model, no. 4349,  shown here just crossing Chamisal Road at Shumala. 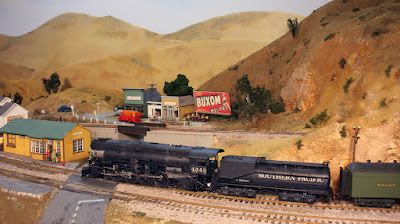 Both the above photos, incidentally, are repeated from my article in Model Railroad Hobbyist in the issue for February 2019, entitled “Choosing a model locomotive fleet,” based on what I have researched and modeled for my own layout. It’s available in the magazine’s “Running Extra” section at www.mrhmag.com .

Something in between the elderly P-4, and the much larger Mt-4, would be better for many of my passenger moves. Probably ideal would be one of SP’s big Pacifics, such as Class P-10, built in 1923-24 and providing  over 43,500 pounds tractive effort (plis a 10,000-pound booster). There is an added attraction with the P-10s, namely that 10 of the 14 engines in the class received SP’s distinctive skyline casing, most during 1940-41.

As it happens, I do have an HO scale brass model of a P-10 Pacific stored away for possible use, a very nice Precision Scale version, and I think this would be an ideal piece of power for my occasional Coast Route passenger moves. It’s a model of SP 2485, and before going further on the modeling front, I need to look into the individual history of that locomotive. But I will reserve that exercise for a future post.

Posted by Tony Thompson at 9:32 AM