As a Southern Pacific modeler, and one interested in produce shipping generally and PFE in particular, I have a lot of PFE refrigerator car models in my fleet. And having written the car chapters of the PFE book, as well as acting as overall editor of the entire volume (Pacific Fruit Express, Thompson Church and Jones), I’m familiar with many prototype as well as modeling issues for PFE.

One issue that often surfaces is the orange color of PFE cars. Until 1929, PFE car sides were yellow, but in that year, a color PFE called “Light Orange” was introduced, and from painting records, we know that by 1934, essentially all of the PFE fleet had become that orange. The color was adopted seven years later by SP for the new Daylight trains, but as many paint chips attest, “Daylight Orange” is identical to the PFE color.

Because modelers are properly concerned with reproducing prototype colors, one thing the authors of the PFE book wanted to include was a reproduction of the PFE color drift panels. On page 414 of the first edition (1992), and on page 418 of the second edition (2000), are reproduced four color panels: Standard Refrigerator Orange, Standard Refrigerator Yellow (the pre-1929 color), Standard Freight Car Red (roofs and ends), and Standard Exterior Gray (for structures).

A scan of the 2nd edition page is shown below. Note that all four panels “bleed” off the page edge (the printer’s term for an image that extends beyond the page edge). This was done so that the page can be laid right onto whatever colored object one wants to check. And when the book was printed, Bob Church and I were at the printing plant. When this color page was on press, we consulted with the pressman in a "true-color" light booth, to make sure we all agreed that the pages coming off the press did match the drift panels. You can trust them in the book, though of course what you see here on your electronic screen is not necessarily the same. 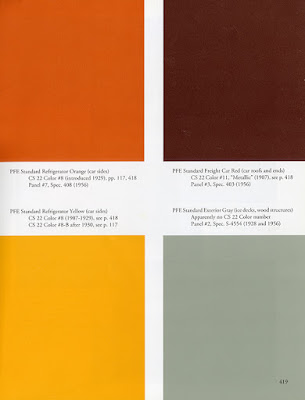 Just for background, shown below is one of the Bowles color drift envelopes, heavy black paper, in which panels were to be stored to avoid fading. SP used the same system; I have commented on the SP structure colors in this same context (see the discussion at: https://modelingthesp.blogspot.com/2012/10/modeling-sp-structure-colors.html ). 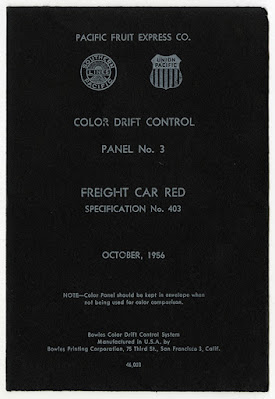 I should also mention the superb resource created by Dick Harley, as part of the book, Southern Pacific Freight Car Painting and Lettering Guide (SPH&TS, Upland, CA, 2016), reviewed in a prior blog post (see it at: https://modelingthesp.blogspot.com/2016/09/new-book-sp-and-pfe-lettering-guide.html ). There was no effort to reproduce color drift panels, but extraordinary detail on lettering is presented. A sample page is below. The orange you see here is certainly close to the PFE drift panel, though not intended as a reference.

This brings me to model paint colors. Back in the day, when model paints comprised Floquil and Scalecoat, many modelers were devotees of one or the other. I tended to be a Floquil guy. Floquil, at least in its later years, produced variable versions of some colors, including Daylight Orange. I remember throwing away some new bottles of that orange that were quite wrong. But today we have a new range of model colors to choose from.

I have stated before, and still maintain, that the best match in model paints that I know of, to Daylight or PFE orange, is Star Brand Paint’s STR-27, “S.P./P.F.E. Daylight Orange.” It can be sprayed or brushed with equally good results. Nearly as good a match is the Tru-Color paint, TCP-107, “Daylight Orange.”

Many modelers are trying to find acrylic paint equivalents, and recently there has been praise for a Vallejo color, “Bright Orange,” no. 70.851. I bought a bottle of this color, along with a bottle of “Light Orange,” no. 70.911. The two are shown below, resting on the PFE orange color drift panel, photographed in midday sunlight. 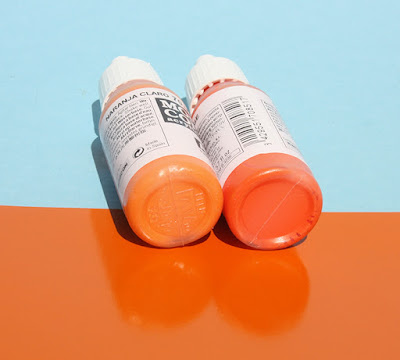 My perception is that the “Bright” color is too red, and the “Light” color not red enough. I have tried mixing, with one drop of the light orange with 4 drops of the bright orange, and it’s pretty close to the color drift. But I haven’t painted a model yet with these colors.  I plan to continue with the Star no. 27 for the time being.