In addition to modeling industry traffic through creation of waybills, and then creating an “operating matrix” of car flows, one needs also to know what the consist of each mainline train should be. I have already discussed my waybill system in a series of posts with “Waybills” as titles, and will postpone to a future post the question of devising a realistic model version of car flows. This post is about train consists.
Now of course I don't mean the exact consists, both because we don’t have remotely the prototype information, and also because the train naturally is different every time it runs. What I mean is, what pattern should it fulfill? Should the Guadalupe local, for example, be half empty reefers outbound and half loaded ones inbound? or maybe three-fourths? or one-fourth? Naturally it carries interchange to and from the Santa Maria Valley Railroad, but also serves packing houses along the SP at Oceano, Shumala and Guadalupe. (The locale of my layout, including a map, was presented in a previous post, at: http://modelingthesp.blogspot.com/2011/01/layout-design-locale.html.) How is the consist of this local train balanced?
The same question can be asked about mainline manifest and ordinary freights, and about the Surf turn. But again, in the absence of prototype conductor’s books or consist sheets, we have to make reasonable assumptions.
For Guadalupe, I can start by assuming a maximum of one-third Santa Maria Valley (SMV) cars, which would mean up to three cars in each train. If there’s another third of the train for Guadalupe itself, mostly reefers for the packing houses there, the balance could come to Shumala. So with these assumptions, we’d expect a couple or three cars arriving in the local each time at Shumala, and the remaining waybills would be for Guadalupe or the SMV. I have created some Guadalupe bills, which look like this (I expect that I will need more of these): 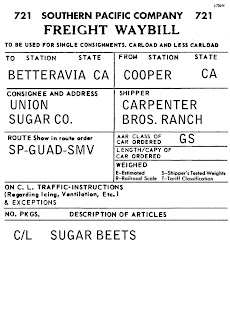 Just to be clear, this is an off-layout destination, but needs to be covered because the cars will be in the consist of the local that works my branch line junction, Shumala. Betteravia, for those who don’t know, is on the SMV and cars destined there would be interchanged at Guadalupe.
I have also created some Empty Car Bills for cars destined to the SMV. Empties coming from the SMV would get SP Empty Car Bills at Guadalupe, since the Empty bills are issued by each railroad over which the car moves. Here’s an example of an empty destined for the SMV:

Next I need to plan the through trains, although they will only pass by Shumala, not doing any work there. From the prototype 1953 timetable, one expects the following through trains in daylight hours (I don’t plan night operation): the “LA Manifest” as Train 914, departing San Luis Obispo (SLO) at 10:15 AM and passing Shumala at 10:48 AM en route to Los Angeles; the westward “Golden Gate Manifest” (GGM), passing Shumala at 8:32 AM and arriving SLO at 9:10 AM. In addition, drag freight 913 should pass Shumala at 2:05 PM and arrive SLO at 2:40 PM.
For more about these trains, see my prior post (at: http://modelingthesp.blogspot.com/2011/01/modeling-freight-traffic-coast-line.html). Contents of the trains naturally varied, but manifests would have few or no empty open-top cars, for example, while drag freights could well have those empties, while having few if any “hot” cars like auto parts or perishables.
And it’s important to emphasize that SP certainly did not adhere very rigorously to freight schedules. They were more of a guideline than a requirement, even for manifest trains. So my timing of through freights need not follow the timetable, and indeed will be more realistic if it does not follow it closely.
Passenger trains, on the other hand, were a priority on the Coast Line, as it was a faster route between Los Angeles and San Francisco, and accordingly hosted the premier trains, the Daylight during the day, and the Lark overnight. The daytime schedule includes No. 71 west (the mail train), passing Shumala at 8:27 AM (just ahead of the GGM) and No. 72 eastward, passing Shumala at 9:17 AM en route to LA. The mail train typically was all head-end equipment except for a single rider coach. On occasion, the mail train may pick up express reefers at Shumala, so the schedule here may be relevant in some seasons.
The Daylight schedule shows No. 99 westward through Shumala about 12:25 PM. Likely I will only operate a single Daylight train (though of course No. 98 should appear a few hours later in the opposite direction), because of staging and equipment limitations.
This is the state of my train design to this point. As I gain more experience with all these trains, I expect to offer future posts to describe changes.
Tony Thompson
Posted by Tony Thompson at 2:44 PM