In my post updating my method for modeling SP tank cars in HO scale (which is at:  http://modelingthesp.blogspot.com/2011/05/modeling-sp-tank-cars.html), I described a method which produces either of SP’s two “late” classic-era tank cars of 12,500 gallons, classes O-50-12 and O-50-13. In my method of doing so, I neglect the issue of dome diameter, as the O-50-12 domes were somewhat smaller in diameter.
But the decals that are now commercially available for SP tank cars, as I described in my post on the subject (http://modelingthesp.blogspot.com/2011/05/sp-tank-car-decals.html), will accurately letter earlier tank car classes O-50-10 and -11, the big difference being that those two earlier classes had circumferential tank sheets above the bottom sheet. That’s a major difference from the longitudinal tank sheets of classes O-50-12 and -13, and of the Athearn HO model.
I’ve used two methods to produce models of the two earlier circumferential-sheet classes. [By the way, you could also model Class O-50-9 if you have a way to add elbow safety valves.] Both methods probably arose somewhere deep in the Scottish part of my genetic heritage, which really hates to throw away those Athearn triple-dome tank car bodies from which domes have been harvested. Here I want to show what I did (and if you think this is an insane amount of work for the result, or for the “saving” of those discarded car bodies, you sure ain’t the first).
After harvesting dome tops from the two outer domes of a triple-dome body, but leaving the center dome in place, I put the tank body into a miter box and cut it up with a razor saw, as shown here, being careful to keep the cuts square. 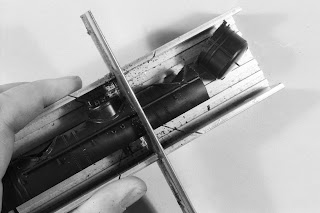 Note at right that the end has already been cut off, just inside the tank hold-down bands. I’m cutting here at a point close to, but to one side of, the center dome. I then would make the same cuts on the other end of the tank body. Then when the tank body is cut into five pieces, they are rearranged as shown here: 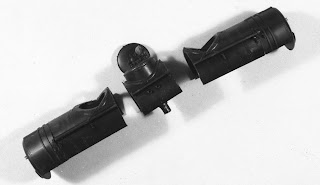 The whole purpose of this exercise is to relocate the craters (where domes were removed) away from the tank ends and nearer the center. The reason will be obvious in a moment. Meantime, I square up all the cuts with a file, and glue them all together, using lots of styrene cement and pressing very firmly so that any irregularities will be softened and squeezed out of the joints. Then rubber bands hold it together to get fully set (some modeling putty has already been applied): 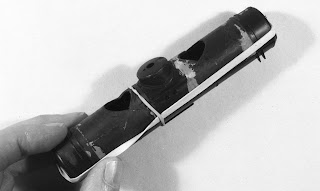 Below is a photo showing a single-dome tank body at top (with dome height corrected), in the center the rearranged (and puttied) tank body I just described, and at bottom a triple dome tank with outer domes harvested but not cut up into five pieces. It can readily be seen that a tank with five circumferential tank sheets of equal width will cover the rearranged tank holes of the middle tank, but a joint would fall into the center of the outer holes of an unmodified tank. You will see in my second method how this bottom tank can be worked with. 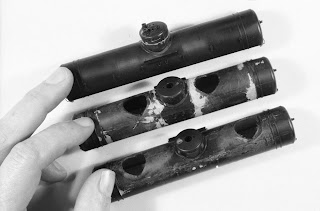 One of my two methods is to use clear styrene, of 0.005-inch thickness, to make those circumferential sheets which sit atop the center and outer sheets, and use a scriber to indent rivets (using fine-spacing graph paper underneath to guide straight and uniform rivet rows--that’s why clear styrene was chosen). Here’s a model made that way, of the O-50-10 class:

Lettering is from the decal artwork now offered by Jerry Glow (http://home.comcast.net/~jerryglow/decals.html). This method certainly works, but the rivets are both a bit too large, and a bit too rounded, not as crisp as prototype rivets would be. The model, in other words, is fine if you don’t examine it too closely. It wouldn’t be confused with an Athearn tank car, but isn’t very refined either.
My second method was an effort to improve the rivets. Having seen the superb products of Archer Fine Transfers (see their products at: http://www.archertransfers.com/SurfaceDetailsMain.html), this seemed like a really obvious chance to use them. [You may note that Archer’s product line is heavily slanted toward 1:35 armor modeling, but railroad products are there too.] These rivets do work, though putting black rivets over a black tank body cannot be recommended; in future I will do a gray primer or equivalent before adding rivets, or else use white instead of clear styrene. Here is how it looked on the first try. I thought I wouldn’t need to slice up and rearrange the body, but just put one big overlay, with one edge flush against the tank bands, and a second one on top of it, so you can see here where the former dome’s hole is located: 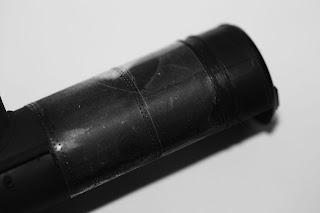 The clear overlays are fairly evident in this photo, and there is a double row of rivets running along the edge of the second or upper overlay. Here is a close-up of the rivets: 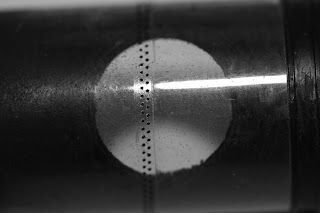 Now in my opinion, these look good, though the rivets are a little too widely spaced. But they were rather tedious to do, because I had to get the staggered arrangement with careful application of two separate rivet rows. I promptly contacted Archer and offered to provide information on tank car double rivet rows. They were very receptive, and as soon as I sent them the data, they produced a new product (in both HO and N scales): 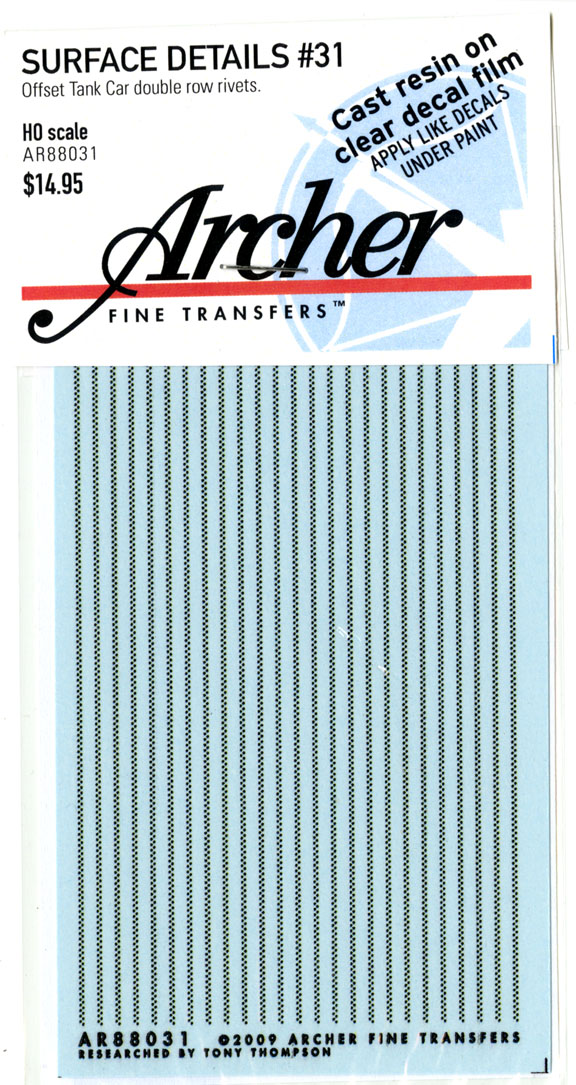 They were even kind enough to credit me at the bottom for supplying the data. So if you want to do tank cars with circumferential rivet rows, now it’s practical. Whether you cut up and rearrange tank bodies to prepare your tank car depends, I guess, on just how many Scottish genes are in your heritage.
Tony Thompson
Posted by Tony Thompson at 10:48 PM