I realized in discussing the way I manage my waybill operations that I haven’t made clear the handling of empty cars. As mentioned earlier, the prototype used a form which was as tall as a regular waybill but only half as wide (to accommodate the common practice of folding waybills in half the long way), and these were used to move empty cars.  This form was usually called an Empty Car Bill or something along those lines.
Here’s an example of one such document, from the Erie: 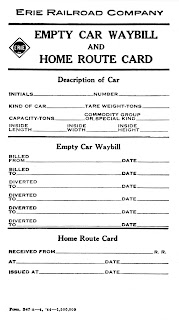 
“Prototypical Waybills for Car Card Operation,” Railroad Model Craftsman, December 2009, pp. 71–77.
“Contents of a Waybill,” The Dispatcher’s Office (publication of Operations SIG), April 2010, pp. 17–24. (A corrected version of this article was presented in a prior post, at: http://modelingthesp.blogspot.com/2011/01/waybills-2.html.)

Before showing my current model forms, it should be emphasized that these prototype forms differed from waybills in that they only were valid on the road which issued them. Upon reaching a junction with another railroad, the receiving railroad might choose to confiscate the car for use on that railroad, or could send it empty to its owner if there was a direct connection, or send it further along the reverse service route. But whatever the routing, it would have to be identified on a new Empty Car Bill issued by the road on which the car was now located.
On a particular railroad, it might be known that cars of a certain type, let’s say flat cars, were needed for loading at another point on the same railroad, in other words, that the empty car might be confiscated. In that case, the Empty Car Bill would not direct the car to the junction from which it was received loaded, but would be directed to the loading point which needed flat cars.
As can be noted on the Erie prototype form shown above, the same form can be used to route cars homeward (Home Route Card) or to move empties in any other way needed (the Empty Car Waybill). I’ve retained that distinction on my model Empty Car Bills. And although I originally intended to identify car type (box, flat, etc.) on the Empty Car Bill, it really isn’t needed with my design of car sleeves, because the car type is on the sleeve. I’ll illustrate.
Here is an Empty Car Bill, in a car sleeve, with the sleeve showing the AAR class identification. It is clearly a box car made empty at Shumala and now to be moved to the next major terminal northward (SP westward), Oakland.

This kind of Bill permits movement in either the logical direction homeward, or in a direction specified by an “Equipment Instructions” document (the latter was explained, and an example given, in a previous post on freight traffic, at:  http://modelingthesp.blogspot.com/2011/01/modeling-freight-traffic-coast-line_30.html).
Inbound empty cars are ordinarily directed to the destination agent, not to a specific industry. When the switch crew arrives at that town, the agent will tell them where the car goes, or if the agent is not on duty when they arrive, there will be a message waiting for them in the “bill box” on the outside of the depot or freight station. However, a shipper request does result in a particular car type being needed, so my inbound Empty Car Bills “For Loading” have that AAR designation in the upper part of the form, and of course the selected car has to match that designation:

A stock of the ones without AAR designation are kept at each town to facilitate movement of empty cars after unloading. Bills for inbound empties for loading, however, are managed as part of the same waybill system as inbound loads. So far this approach, using two types of Empty Car Bills, has been working well for handling empty cars on my layout.
Tony Thompson
Posted by Tony Thompson at 9:47 PM