This is the twelfth in a series of posts entitled “Choosing a model car fleet,” and because it will require multiple parts to be presented, I’ve changed the title a bit. The reason to expect multiple parts is simply that box cars were very numerous, the commonest car type on North American railroads in the 1950s. Moreover, western railroads such as SP, UP, WP, Santa Fe, GN, NP, Milwaukee and others all had box car fleets substantially larger (in percentage terms) than the national average.
I plan to present my model car fleet ideas for box cars in at least these parts: the SP cars; cars of other railroads; and “signature” cars of other railroads. For the SP cars, I expect to proportion my model fleet according to the proportions of the SP prototype fleet, as I discussed for PFE cars in my first post on this topic, at:  http://modelingthesp.blogspot.com/2010/12/choosing-model-car-fleet.html. A similar idea will be the basis for cars of other railroads, according to the Gilbert-Nelson hypothesis I’ve described previously. (see: http://modelingthesp.blogspot.com/2010/12/choosing-model-car-fleet-2.html) In the present post, I just want to introduce these topics.
The term “signature cars” perhaps deserves some explanation. Modelers and railfans have long recognized distinctive or unique freight cars of certain railroads, cars like the Milwaukee Road ribbed-side box cars, and the Baltimore & Ohio wagon-top cars with their distinctive continuous roof-and-side design. Such cars are icons, and of course I will have examples in my fleet, but by “signature” I mean something different. I mean cars which typified the fleets of their owners, being present in sufficient numbers to form an important part of that fleet, and not being widely used by others. Examples would certainly include the Pennsylvania X29 (and the PRR wagon-top cars), but also cars like the wood-sheathed 1937 AAR box cars of NP and GN; the “Fowler” box cars of D&RGW; the double-sheathed WP box cars; and many others.
The signature cars are in most cases not candidates to be produced in injection-molded styrene, but are natural candidates for resin kit production. This is the avenue I’ve followed for some of these cars, and many desirable cars of this type are available as kits from Westerfield, Speedwitch, and especially Sunshine. I should emphasize that I have chosen these along with the unique or distinctive cars like the B&O wagon-tops, in making up the non-SP part of my model box car fleet.
My approach is still to use a Gilbert-Nelson sense of numerical proportion, but in appropriate cases to choose the signature car, if available, along with the myriad 1937 AAR steel box cars and other standards. Almost any fleet will need plenty of standard cars, but ideally would be leavened with unique and signature car types too.
I’ll just show a single example here, one of the NP double-sheathed box cars in a series that numbered in the thousands. Mike Brock likes to say that one of his rules of freight cars is that every train contains at least one NP box car. I wouldn’t go that far, but he is right that they are often visible (partly because of their distinctive arched road name lettering, allowing them to stand out among otherwise anonymous cars). This model was built by Dennis Williams, but lettering and weathering were done by me. It’s from from Sunshine kit 52.2, modeling the NP 10000–13999 series double-sheathed box cars with corrugated steel ends. 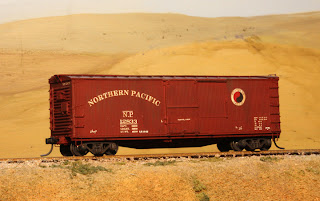 Additional posts on this topic will delve into my SP box car fleet, along with the emerging patterns among the box cars of other railroads which I’m operating.
Tony Thompson
Posted by Tony Thompson at 6:08 PM