A few words on packing houses and produce shipping-3

In my previous post on this topic, I discussed pre-cooling, pre-icing, and related issues for refrigerator car service (see:  http://modelingthesp.blogspot.com/2011/07/few-words-on-packing-houses-and-produce.html). This time I am going to say a little about car loading for shipment.
I mentioned in my first post on produce shipping that the containers used for various fruits and vegetables varied in size, but all were optimized to fit into the standard refrigerator car interior, and also be appropriate for the particular kind of produce (see: http://modelingthesp.blogspot.com/2011/06/few-words-on-packing-houses-and-produce.html). Here is an illustration of a load of containers as packed into an ice refrigerator (the drawing is from the SP Bulletin, 1928):

Note that in the car center, spacers have been placed both to complete the filling of the load space, and to make it easy for workmen to get into the car for unloading. Air flow for ventilation service is illustrated.
Depending on the shape and size of containers, the produce would be stacked various ways in the car. It can be noticed in the drawing above that the load does not reach the ceiling, largely to ensure good air flow. The same was done with orange crates, as shown here (it’s a Sunkist photo from my collection): 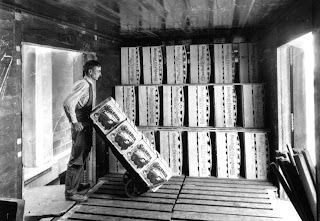 This image dates from the 1920s and shows the hand truck so often used for loading in early days. Note also the so-called “car strips” in the doorway at right, used to make sure that the load fit firmly into the car interior. The bulging crates are a deliberate feature, to provide some “spring” in the load tightness. Also evident here is the square end shape of the crate.
A similar but larger crate was used for lettuce. Here is a view from the 1950s of lettuce loading at Salinas (this is a PFE photo from my collection):

The roller trays used to deliver crates to the loading spot are very commonly seen in photos. These crates also have some “spring” to them.
A leafy vegetable somewhat like lettuce but shipped as upright plants is celery. Here is a later view of celery crates, being loaded by fork lift truck into a later car with load dividers (the image is from southern California, a UP photo provided by Terry Metcalfe): 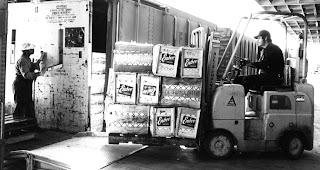 The crates are taller than they are wide, in keeping with the shape of celery in its shipped form.
My last loading example is cantaloupes, shipped from the Coit Ranch in Firebaugh, California. Again, the crates are a different shape, and are stacked in the car on edge. The ice bunker wall has a portable fan mounted for air circulation during loading, likely implying that the car has been pre-iced. This photo is from the Railfan and Railroad magazine collection. 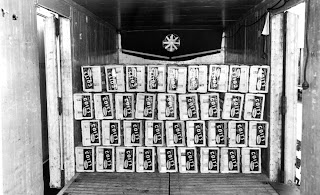 Most of these crates are not widely different from square in the end view. But several other crops used quite different crate shapes. Both tomatoes and pears, being more fragile produce, used a very flat crate, as can be recognized from this pear box label (from the days when the region was called the Santa Clara Valley, not yet Silicon Valley):

These examples, largely drawn from the PFE book though cropped somewhat differently, should suffice to illustrate that modeling shipping arrangements requires knowing the crate size and shape for the produce you are modeling.
Tony Thompson
Posted by Tony Thompson at 1:18 PM