It’s been awhile since I commented about waybills. That’s mostly because the system in use on my layout seems fairly mature and successful. But there’s nothing like a jolt to your thinking to bring out all sorts of new ideas and insights, and that is what this post is mostly about.
First, though, I want to mention that a book I’ve cited in my magazine articles and promoted in my clinic presentations is now available as a Google digitization, on the internet. The book is Eugene W. Coughlin’s work, entitled Freight Car Distribution and Car Handling in the United States (Association of American Railroads, Washington, DC, 1956). Coughlin was a manager in the AAR Car Service Division, and his book is an immensely revealing description of many of the operations we as modelers want to duplicate. He even includes a detailed description of one railroad’s course of instruction in the Car Service Rules, for those who’d like to learn more about that subject. The book is readily available from used book dealers on the internet, often for prices like $15, but you can now read it on line, at:

What comes up is the outer cover, followed by some blank pages, but keep scrolling down and you find the entire book.
Now to the waybill “impact” I mentioned. I’ve been suggesting to Otis McGee that he could do better with the waybill procedures on his fine Shasta Division layout (see the 2011 issue of Kalmbach’s Great Model Railroads). He presently uses the traditional “mini bill” or, as some call it, the "MicroMark bill” in the usual four-cycle implementation.
To use a waybill procedure like the one I use, with clear plastic sleeves to hold the paperwork, it was essential for Otis to retain a waybill of the same width as his current ones, since his waybill filing slots are cut into the layout fascia and thus not amenable to changes in dimensions. This immediately brought to mind the plastic sleeve used by Tony Koester, chosen for the same reason of being a bit over two inches wide. This vinyl sleeve is a commercial product. Otis bought his sleeves from Everyday Plastics, whose web site is at: http://www.everydayplastics.com/  Here is what they look like: 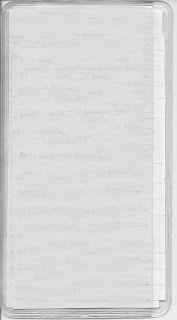 The sleeve is four inches high and has the long side open (you can see that the upper sheet is slightly narrower than the lower sheet to facilitate access at the right edge). The three closed edges are sealed and crimped for reinforcement.
The key point is not that the sleeve is different in size and proportions from the baseball-card sleeves I use. The point is that Otis wanted to see if we could dispense with having to put car initials and numbers on the sleeve itself (in other words, for the sleeve not to act as a car card). That, of course, also describes the procedure Tony Koester is using.
We are still exploring all the ways to make waybills to take advantage of the plusses of this sleeve, and ways to counter the disadvantages. For the moment, I want to just show examples of what we are now looking at.
First, a straightforward waybill, for a load of cement in a covered hopper. 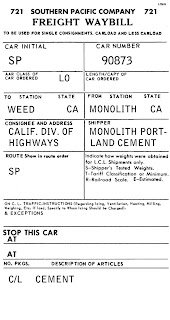 This is straightforward because the car can return empty to its origin for reloading, and then return again with another load of cement. In other words, all we need to put into an unmarked sleeve is this waybill, backed by an Empty Car Bill. The two bills alternate being uppermost in each direction, and the car’s actions are simple and prototypical. Here is the Empty bill: 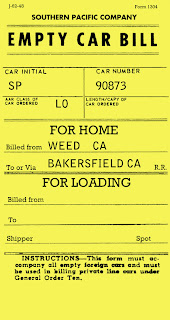 Note that both the waybill and the Empty Car Bill have an important feature which reproduces the prototype: the car initial and number are at the top of the bill.
In the waybill first shown, it may be noted that I have increased the amount of information from the prototype waybill form, both the “STOP AT” notation, used for LCL and other partial shipments, and also increased the spaces for car routing, instructions, and descriptions of cargo (because the waybill is taller). To take advantage of the “stop car” entry, waybills have been devised which direct use of car stops for unloading partial shipments, in this case cartons of shoes: 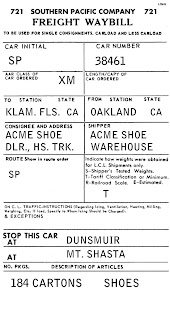 The waybill provides that this SP box car will be spotted at the freight house in two towns, Dunsmuir and Mt. Shasta, for partial unloading at each place, before moving to the final unloading at Klamath Falls. This adds switching moves, among other things.
As more of the plusses and minuses of this sleeve and waybill arrangement become evident, I will add posts on this topic to explore them.
Tony Thompson