Having shown a brief selection of the waybills being designed for Otis McGee in the previous post on this topic (see:  http://modelingthesp.blogspot.com/2011/07/waybills-9.html ), I want to expand on that to show some of the specialized ideas we are exploring. Before doing so, I want to clarify my previous comment, that the vinyl sleeves Otis is considering are the ones Tony Koester uses. That’s true, but Tony wanted me to explain that Ted Pamperin had discovered the particular sleeve design and the source for them. Ted has done a lot of fascinating research on prototype waybills and other car movement paperwork, and I’m happy to give him the credit on this point.
The AAR standard waybill was used by just about every railroad, conveniently for modelers who want to create a modified form for model use. In addition to the waybill used for most cargo, AAR Form 98, there were specialized waybills for several purposes. These included perishables (which the AAR stated should be “printed on pink stock”), livestock, “astray” cargoes (meaning waybill lost), and some kinds of LCL. In later years, there was a waybill for TOFC cargo, though later still that got integrated into Form 98.
Here is an example of the new waybill design for perishables. Like practically all perishable loads on Otis’s layout, it does not have an origin or destination on the layout, but is bridge traffic. 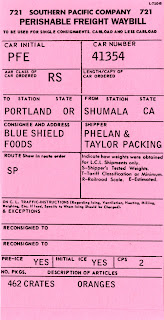 This is a PFE car, the dominant produce car owner on Otis’s SP layout. Much of his perishable traffic moves in the “North Coast Perishable” train, or NCP, a prototype train code from the 1950s, and this car is likely in that consist during most operating sessions. When it returns southward empty, it will move on an Empty Car Bill like the one shown in the previous post.
But some of the traffic may be Santa Fe reefers. In the 1950s, PFE and SFRD were vigorous competitors, and neither wanted one of their customers to be loading cargo into a car of the other line. PFE retirees assured me that this would almost never have happened, that PFE and Santa Fe would return each other’s empties to the owner even in times of car shortage. But if a shipper located on the Santa Fe routed a load in an SFRD car via SP to the northwest, it would show up in the NCP. Here’s a waybill to create that movement: 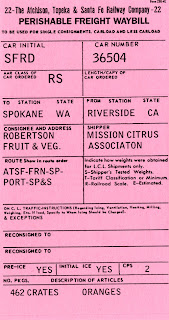 Note that this is, of course, a Santa Fe waybill, routed via Santa Fe as far as Fresno. This must be a shipper routing; if the Santa Fe had its way, the car would likely move up the Inside Gateway, handed off by Santa Fe to Western Pacific and then to Great Northern. But shippers had, and often exercised, the right to choose routing (subject to “approved routing” agreements).
Either of these bills can be readily modified by a “short bill.” That’s a bill which overlays waybills of the kind just shown, at the bottom, and provides different origins, destinations, or both, and possibly different loads as well. Here’s an example, for a PFE car (it is of course the same width as the taller waybill): 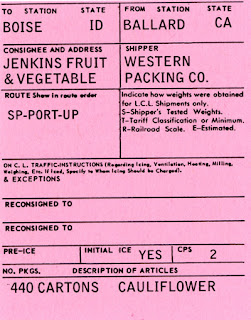 This would sit inside the sleeve atop another waybill having a car number.
Like the other PFE waybill, the origin on this load happens to be on my layout.
OF course, “short bills” can be used with regular waybills, not just with perishables. Here is an example: 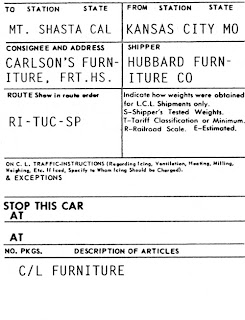 Such a short bill could fit with about any box car which might be moving on the layout. But of course it can only be added to a waybill from a Kansas City railroad. More on this below.
The other commonly used special waybill was the livestock waybill. It has a number of locations on it for specialized entries not relevant to non-livestock freight movements. Here is an example (filled out with a Teletype font): 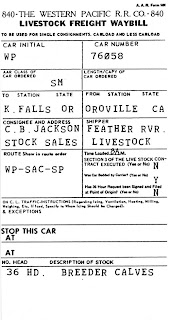 This is an off-layout destination, and note the entries to the right of the box for routing. Here again, this car would subsequently move homeward on an Empty Car Bill.
It is tempting in making the larger bill which include car initials and number, to always make them with railroad names of their owners. But of course that isn’t always what happens. Free-running cars like box cars could and did move in all directions all the time. Here’s an illustration: 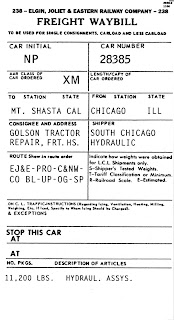 This waybill illustrates the biggest problem with this waybill system: that it is not simple to implement the behavior of free-running cars. An overlay “short bill” does not work for a different load, unless it also originates on the EJ&E (not a railroad with an immense number of shippers). The same point was made above with the short bill for a furniture load. What this point means is that full-height waybills need to be made for all loads which one anticipates a particular box car carrying. Or to put it another way, a particular boxcar load, whether inbound or outbound, has to have a waybill made for it with all eligible box cars, possibly a couple of hundred cars on many layouts, and that is for each load.
It is this problem, in fact, which drove Doug Smith and others to invent car cards in the first place. Systems like my baseball-card sleeves are just a refinement of that idea.
How will we get around this on Otis’s layout? We’re still working on that. The obvious solution, which I’m hoping to avoid, is to just create a few waybills for each car and forget flexibility. That’s essentially the old “four-cycle waybill dance,” and it does get things moving without excessive paperwork or waybill handling. Whether we will finally decide to go that way for efficiency’s sake, remains to be seen.
Tony Thompson
Posted by Tony Thompson at 12:21 PM