Some years back, Terry Wegmann did the die work for parts to convert the Red Caboose model of a PFE R-30-9 car into the R-30-16 class. Briefly, the prototype -16 rebuild was characterized by a solid-steel (straight-panel) roof instead of the outside metal roof correctly modeled on the original kit of the R-30-9. Terry’s conversion kit included the new roof and all roof hardware, a set of correctly shaped cross-bearers for the underframe of the rebuilds, and a piece of styrene to fill the gap above the car ends and below the roof molding. Otherwise, the kit was to be assembled stock.
There were 3554 cars rebuild to R-30-16 standards during 1940-42, which means I need at least two and probably three of these. I do have a few of Terry’s kits, so decided to build one to see what techniques might be involved.
The first thing the modeler is advised to do is to cut down the interior end sheets on the Red Caboose car body, in order to clear the new roof molding. It doesn’t have to be lowered very far, and this could probably be done by a little filing. I chose to use a razor saw to make cuts about 1/8-inch deep along each side, then I scribed across the width, and snapped off the top section. Here is a photo of an original body on the left, and a cut-down interior end sheet on the right, with the removed slice balanced on my finger. I removed more than is really needed, but there is no harm done by this.

This is a very easy and quick job, and took me considerably longer to type the description than to do it.
Next I assembled the underframe with the new cross-bearers. The photo below shows it mostly complete, and the characteristic diagonal end profile of the new parts is evident. All parts visible here are stock kit parts except the cross-bearers.

As can be seen, I used the K brakes provided, which PFE also did in the first 1200 cars rebuilt. The remainder of the class was rebuilt with new AB brakes. In the late 1940s and early 1950s, replacement of the K brakes with AB brakes continued on all PFE car classes, but a fair number of the rebuild cars still had K brakes as the AAR deadline for their replacement approached.
At this point, the directions recommend assembling the rest of the kit according to kit directions, so I did so. This is one of those pleasurable kits to assemble, in that all parts fit and drop into place as they should. I did take the precaution of drilling out mounting holes for most parts with a #75 drill, but I’m not sure that was necessary.
After assembling ends and underframe to the body, I installed Kadee #58 couplers and the kit trucks (I used Reboxx wheelsets in the Red Caboose T-section trucks). The screw hole in the bolster is not a clearance hole for the screws provided. I cleared the truck bolster holes with a #40 drill, and then the trucks could rotate freely. I’ve never been an enthusiast of the “equalized” Red Caboose trucks,  because I’ve sometimes found that the “equalization” of these trucks can get sticky, and when that happens, I just replace the trucks.
Next, I added weights inside the car before attaching the roof. I like to use large steel nuts as weights because they are compact and inexpensive. For this car they are 5/8-inch nuts, which weigh one ounce each, and are attached with airplane canopy cement (I use Wilhold R/C-56, now out of production, but Zap, Pacer and others make the equivalent adhesive). The glue dries clear, so is not visible on the car floor.

After this photo was taken, I painted the inside of the car sides with black acrylic paint. The translucent orange styrene sides can take on an odd appearance in some lighting if the back of them is not painted a dark color. (An alternative is to paint the body exterior Daylight Orange before beginning any assembly.)
Next comes the roof. The Wegmann steel roof has a very thin section over the ends, to permit a filler strip to fit between the top of the kit end and the bottom of the roof. The Wegmann conversion kit provides for this purpose a strip of 0.040 x 0.080-inch styrene. On my car, this is about right at the A end, but is a little too thick at the B end. Some light filing of the top of both kit ends made everything drop into place. As it says in the Wegmann directions, “cut and fit” the styrene. Here’s how mine looked.

After attaching the roof to the car body, I added the roof parts to the roof. I prefer to add these kinds of details to a firmly-fixed surface, rather than detail the roof before attaching it to the car.
There are a variety of decals available which can letter this car. I used a Champ set (“Super Set” SHS-190) which was included in one of my Wegmann conversion kits. I also used the railroad medallions from Microscale set 87-414 (as revised in 1995; this set is to be re-issued one of these days with even more complete data and somewhat better detailed lettering and emblems). The Champ set does have the 7-inch end lettering used for a time by PFE. Here’s the car at this point:

This photo shows the model with decals applied but side ladders and grab irons are not yet added (so model can be set on its side for decal application), nor are hinges and door hardware painted black yet. Once those jobs are done, the car will be weathered and receive fresh reweigh and repack data.
Here’s a photo of a prototype R-30-16 car, a print that came to me via PFE on the way to CSRM (taken at UP’s Albina Yard in Portland, 1948). Note the appearance of the roof edge on both sides and ends, faithfully captured in the Wegmann roof design (you may have to click to enlarge the image to see that detail). The 7-inch end lettering is also obvious. 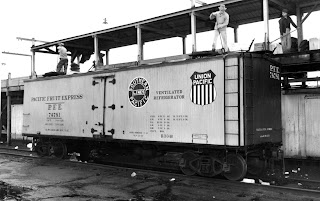 The car pictured, PFE 74781, was rebuilt with AB brakes. My car number is chosen to fall into the first 1200 cars of the class, which had K brakes when rebuilt.
With all these techniques and approaches worked out, my next job is to build two more of these cars to fill out my fleet of PFE Class R-30-16.
Tony Thompson
Posted by Tony Thompson at 10:34 AM