In a prior post, available at http://modelingthesp.blogspot.com/2011/02/choosing-model-car-fleet-4-automobile.html, I discussed my overall layout fleet of automobile cars (defined by the AAR until 1954 as house cars essentially like box cars but with double doors). In this post I discuss the SP part of my auto car fleet.
As with prior evaluations of fleet size, I proportion my SP automobile cars at one model per 1000 cars in the prototype fleet. The simplified table below provides the size of car classes in order to indicate model fleet needs.  Details of built dates, service, and car specialties are available in my book which describes these cars, Southern Pacific Freight Cars, Volume 3: Automobile Cars and Flat Cars (Signature Press, 2004). I have omitted classes which by 1953 were well below 1000 cars, with exceptions as noted. 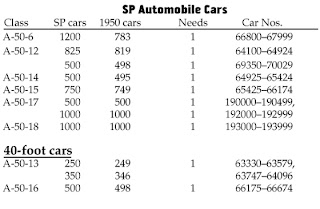 Classes A-50-17 and -18 were built after 1950, so the “1950 cars” column simply contains the total number of cars built. Many classes prior to the 1936-37-built Class A-50-12 were well under 500 cars, and whenever T&NO received part of a class of auto cars, it was an even smaller number; after 1925, no more auto cars were built for T&NO. Thus I don’t intend to model any T&NO automobile cars.
The numbers of cars needed are small throughout and in most cases are in excess of a strict 1:1000 ratio. I already have too many of some earlier classes and will be thinning that part of the fleet in favor of the better models.
The big challenge is the postwar 50-foot cars, classes A-50-15, -17 and -18, which cannot be readily modeled at present because of SP’s continued use of the 4+6 side-sheet pattern (typical of prewar cars) into the postwar construction. Available models with postwar characteristics such as Improved Dreadnaught ends and diagonal-panel roofs do not have the correct pattern of panels. It may be possible to revise the panel pattern using Archer rivets, as I described for the 50-foot box car class B-50-30 (see http://modelingthesp.blogspot.com/2011/08/choosing-model-car-fleet-sp-50-ft-box.html), and if so I will attempt the same for the large postwar automobile classes.
My best models from among these classes which are in service at the moment are probably the Proto 2000 models which represent SP’s Class A-50-14. I do have two of them and will keep them in service. This car is entirely stock except for some light weathering.

Photos of two other classes were shown in my overall discussion of automobile car needs, at http://modelingthesp.blogspot.com/2011/02/choosing-model-car-fleet-4-automobile.html.
I mentioned that the “needs” listed in the table above are somewhat in excess of the usual proportion. My reason for so listing the auto car models beyond a strict proportion of the SP fleet is that there was traffic on the Coast Line in both assembled automobiles and auto parts, and these cars will be used to represent that traffic.
Tony Thompson
Posted by Tony Thompson at 10:45 PM