A few words on packing houses and produce shipping-4

This post should wrap up this topic on packing houses and produce shipping. I want to emphasize some vital details in understanding produce shipping: transit temperatures and crop seasons. Both are discussed in the book, Pacific Fruit Express (Anthony W. Thompson, Robert J. Church and Bruce H. Jones, Signature Press, 2nd edition, 2000).
In a previous post in this thread (see: http://modelingthesp.blogspot.com/2011/07/few-words-on-packing-houses-and-produce.html) I discussed precooling and pre-icing, the topics relating to cooling of produce before shipment, whether by shipper’s cooling (precooling) or by loading into a cold car (pre-iced). These can of course be combined. Either way, the purpose is to remove field heat and get the produce close to or at shipping temperature. Whether that occurs before departure of the loaded reefer, or occurs during the first day of transit, may make a big difference in quality of the produce on arrival at its destination.
How vital precooling might be to a particular crop might be difficult to guess, but one helpful piece of information is the “desired transit temperature” table provided by the U.S. Department of Agriculture. Here is the version of that table from USDA Handbook 195 (1961), which is also in the PFE book, Chapter 14. (You will probably have to click on the image below to enlarge it to readable size.) 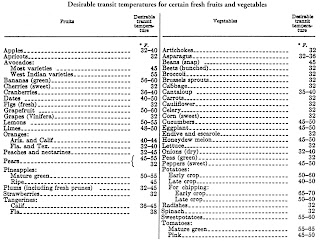 A number of vegetable crops, such as broccoli, cauliflower, and celery, are desirably shipped at 32 degrees, while some crops, like lemons, are usually shipped at 50 to 55 degrees--quite a range. And in fact, lemons were usually “conditioned” prior to shipment by storage at more or less ambient temperature, which along the California coast in summer is not terribly warm, with a cool marine breeze most days.
Today in the Santa Maria Valley and north of the Santa Maria River towards Nipomo and Oceano, field crops continue to be dominated by, for example, broccoli, and there are extensive precooling facilities to be seen. In fact, right in my modeling area at Nipomo is the Guadalupe Cooling Company facility, to which several packers bring their field boxes of produce, to precool before shipment. Today, those shipments are by truck, but a similar requirement would have existed for rail shipments in the 1950s, when I’m modeling this area. I may well model the Cooling Company instead of a traditional packing house, because multiple crops can be shipped from it.
My second point for this post is to emphasize seasons for particular crops. The second edition of the PFE book contains a very detailed table of crop seasons on pages 442 to 447. I have cut and pasted parts of the table (only a small fraction of those six pages!) to show some crops from the Santa Maria-Guadalupe District, as it was called. Again, you may have to click on this to enlarge it for perusal.

At the top, I’ve shown a complete entry for cauliflower, showing all the districts listed, to give a sense of how extensive the complete table is. The other crops only show the district of interest and a couple of adjoining entries. The black bar is the peak season, the gray bar indicates lower intensity shipping.
You can note right away that among just these four crops, seasons vary widely in the Santa Maria-Guadalupe District. For cauliflower, the peak is January through May, with lesser shipping June through August. Celery ships all year except April and May, while broccoli ships year-round (peak season December through May). For cabbage, the entire and peak season is April to June.
These same kind of summaries could be made for other crops which are grown in the Nipomo area, such as strawberries, citrus, and stone fruits, as well as vegetables such as artichokes, lettuce, tomatoes, peas, and potatoes.
My intention, not really implemented yet, is to model the entire year of 1953, and to operate perishable shipments appropriate for the current season in which the operation takes place. Thus in an operating session in August, as it is today, I would be moving broccoli and cauliflower at low levels, and more celery, but no cabbage, just to pick among the four vegetable crops presented in the crop season table above. To that end, I’ve created waybills for all these crops, and would select the appropriate ones for any month.
Tony Thompson
Posted by Tony Thompson at 2:05 PM