In the previous post with this title, I discussed SP’s box cars of AAR design, 40 feet long, spanning the years from 1936 to 1953 (see:  http://modelingthesp.blogspot.com/2011/07/choosing-model-car-fleet-sp-box-cars.html ).
In this post I address the cars which preceded those AAR-design cars, and for simplicity will only include those which survived in significant numbers by my modeling year, 1953. These would be classes B-50-12 through B-50-16. As I have done before, I show below a table of the cars and car numbers in each of these classes, along with a column entitled “Needs,” which means the rough number of cars I would want to have in my total car fleet, at a rough ratio of one model per 1000 prototype cars. Here is the table: 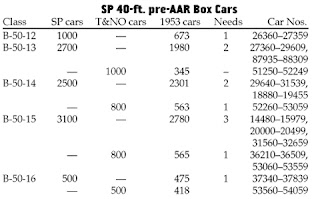 It’s worth mentioning that in this table, I listed the numbers of cars originally built, partly to provide comparison to the table I showed in the previous post by this name. But with older cars like these, as-built numbers are potentially misleading, because my own model fleet should reflect 1953, not the original fleet as it was built in the 1920s. That’s why there is a column for 1953 survival.
It can be seen immediately that the B-50-13 and -14 cars, nearly identical body styles as originally built, were built as 3700 + 3300 cars, a total of 7000, a very substantial group of cars and almost evenly divided between the two classes. But it should be noted how much attrition there was among the B-50-13 cars.I will comment below on modeling these.
Second, the B-50-15 and -16 cars, with similar though not identical bodies, originally totaled 3900 + 1000 cars, 4900 total cars and like the -13s and -14s, a considerable group which has to be modeled, though in this case dominated by B-50-15. And these classes had significantly less attrition that B-50-13 and -14.
Lastly, the Class B-50-12 group, which originally was the USRA single-sheathed design, was rebuilt to all-steel (and quite different looking) cars in 1949.
To summarize the modeling approaches which are possible, the B-50-12 cars as rebuilt have been done in resin by Sunshine and in brass by Challenger, both beautiful renditions. The B-50-13 and -14 cars have been done in resin by Sunshine, with most of the variations in roofs, doors and ends encompassed by the prototype. And the B-50-15 cars, originally wood sheathed but later mostly steel-sheathed, have been done in brass by Challenger and in resin by Sunshine, again, outstanding models in both media. The B-50-16 class, admittedly smaller, has not been done to date, as far as I know, but since it differs in having a Dreadnaught end instead of the corrugated end of Class B-50-15, could certainly be kitbashed from a Sunshine kit.
To illustrate results, I will show a brass car and a resin car. First, the resin, which is a typical B-50-14 with the Dreadnaught ends added in the early 1930s to almost all of the class, in the form of a Sunshine model.

The brass one is a Challenger B-50-15, and here I’ve chosen a T&NO car to illustrate the class:

Comparing my present car roster to the table above, I still need two cars, chosen from B-50-13 and -14, for my fleet, and will probably try a kitbash of a Sunshine B-50-15 kit into a B-50-16, since I already have the entirety of the “needs” identified in the table above, for Class B-50-15. And that, by the way, is one advantage of doing a “fleet analysis” of the kind I’m showing here: it tells you what you do not need. I guess I’ve reached the point where that’s as welcome a message as finding out what I do need.
Tony Thompson
Posted by Tony Thompson at 5:46 PM