I received a comment via e-mail, entirely appropriate, asking why I had not included car numbers in my original post about SP box cars (the AAR cars from 1936 to 1953). You can view it at:  http://modelingthesp.blogspot.com/2011/07/choosing-model-car-fleet-sp-box-cars.html. It is certainly true I didn’t include them, unlike my original “car fleet” post about PFE, and unlike my Part 2 on SP box cars.
The reason was that there are a lot of car classes, and some of the car numbering is complicated, so I was trying to keep the table compact. No doubt I was also hindered by thinking that many people who are serious about SP box cars of this period likely have my book (Southern Pacific Freight Cars, Volume 4, Box Cars, Signature Press, 2006) and thus could find far more detail that I could readily provide here. But both reasons are kind of weak.
Accordingly, here is a more complete table, with essentially the same information as before about numbers of cars in each class, but adding the numbering data, and separating out the T&NO cars in separate lines. 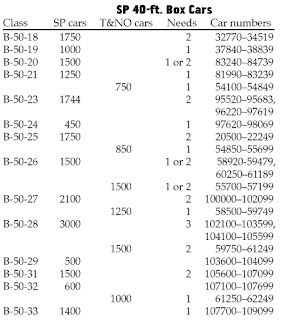 The core idea of the table changes little with this version, except it may be easier to compare the table to numbers on your models, if you’re working from that end.
There is a second point about which I’ve been asked. There are classes, such as B-50-25, for which there is no model, but possibly a B-50-26 model could be used for it, because they are both 12-panel box cars, and InterMountain, after all, makes such a box car and sells it in lettering for Class B-50-26. How about it?
The most visible difference between most of Class B-50-25 (which is a big class, after all) and the B-50-26 class is the car door. The so-called “interim improved Youngstown door,” which the 1946-built cars of the -25 class shares with the famous “Overnight” cars of Class B-50-24, is not offered by InterMountain, so they are right not to letter their model for a class they can’t quite represent.
But this door does exist as a commercial product. It’s made by Southwest Scale Productions (visit their web site at: http://www.southwestscale.com/ ) and will drop right into place on an InterMountain box car model. (You want the one for a 10' 0" inside height car.) So yes, you can model the -25 cars of 1946 (1600 cars) with Intermountain models, by changing the door.
Is that all? Well, running boards and hand brakes did differ amongst various parts of the B-50-25 and -26 orders, and if you want to get those details right also, I’m afraid you will need to consult the very detailed tables in my book. At least it is convenient that all the cars of these two classes got the same trucks, ASF A-3 “Ride Control” trucks, and we have lovely commercial versions of that truck from Kato and Kadee, and now from Tahoe Model Works.
In 1947, 1000 more cars of Class B-50-25 were built, without the wide-seam door. These are the highest 500 car numbers for both SP and T&NO. This door, no longer “interim,” is in fact close to the door InterMountain puts on their models. The 1948 construction of Class B-50-26 was exactly like the 1947 cars of Class B-50-25. (But again, specialties other than doors did differ.)
On my part, I’ve ended up with too many InterMountain models of B-50-26 cars, so some of them will be renumbered for the 1947 B-50-25 cars, and others, in kit form, will be built with the Southwest Scale door to make 1946 cars of B-50-25. Most will also get correct running boards and brake gear.
Tony Thompson
Posted by Tony Thompson at 10:33 PM