Friends of the Freight Car

I was asked recently to describe what the “Friends of the Freight Car” is, or isn’t. The well-known polo shirts with this legend on them are certainly the best-known aspect of it. The story is fairly simple. I was the Clinic chair at the 1990 NMRA National Convention in Pittsburgh, where I lived at the time, and decided to invite practically everyone who had been active in publishing about freight car modeling, as part of the clinic program.
This was before the Internet was a significant means of communication, so “publishing” really was all one could go on. I sent letters to those I knew and those I’d only heard of or knew by reputation. In the event, nearly everyone who was invited did come to the convention. The talks they gave fit well into the theme of that convention, “Learning from the Prototype,” which our committee intended partly as a reaction against so many NMRA conventions which had been almost of an opposite theme.
I wanted to do something to get us all together socially, so my wife and I hosted a barbecue at our house that August, for all these freight-car experts who were in town, and at the last minute I had the idea to call it the “Friends of the Freight Car” dinner, and also to get polo shirts made with that legend on them. Time was short, and I couldn’t get the boxcar-red colored shirt I wanted, so settled for orange.
Many of us at the barbecue put on our new shirts and posed for a photo. Several cameras photographed the group; here is the photo taken by Patricia Westerfield, whose generosity in sharing this image is much appreciated.

Here are the names of those shown: front row, left to right, standing: Larry Kline, Jeff English; kneeling, Todd Sullivan, Al Westerfield, Stafford Swain, and me. Middle row, left to right: Bob Schleicher, Byron Rose, Richard Hendrickson, Richard Yaremko, Chris Barkan, Jack Burgess, and Frank Peacock. Back row, left to right: Keith Jordan, Staffan Ehnbom and Johnny Johnson.
The outlined freight car on the shirt was a steel box car, incidentally a Pennsylvania X29 car, mostly because a suitable drawing could be found quickly. But it was surprising how few could identify it from the drawing alone. Here’s what it looked like:

These shirts had been bought as part of the convention budget, as a thank-you gift to these clinicians, and nearly all were given away for that purpose. But others saw them being worn at various meetings and asked if more could be made. Richard Hendrickson and I had been organizing more “Friends of the Freight Car” dinners at the meetings we attended, and decided to go ahead with another shirt. This was a bright yellow shirt, with a refrigerator car as the freight car. It looked like this (you can see that the printing wasn’t applied exactly flat onto the shirt--most shirt logos in this batch looked like this).

It was introduced in 1996 at the NMRA National Convention in Long Beach, California, since we had one of the Freight Car dinners at that meeting. This time we sold the shirts, essentially at cost.
There were 100 of the yellow shirts produced, and the ones not sold at Long Beach were sold out at the Naperville meeting that fall. Richard and I thought that they would slake the demand. But before long, once again people were asking how to get one of the “FOTFC” shirts. We decided to do one more. This time, it was a black shirt with a tank car on it, and we introduced it in 2000 at the San Jose NMRA National Convention, again because we could sell them at the FOTFC dinner. 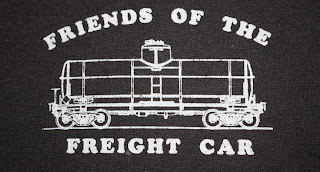 Like all the logos, it was applied to the shirt on the side opposite the pocket. This third shirt took awhile (several meetings) to sell out completely, so Richard and I decided we were out of the shirt business. Below is a photo of me wearing one of the black shirts, so you can see the logo location and relative size.

Ever since, we have heard regularly from people who either never got one of the shirts and wanted one, or folks who had worn out (or possibly outgrown) one or more of the earlier shirts and wanted a new one. After stalling for several years, this year we decided to go ahead and produce one. The color chosen is red, and the freight car on the shirt is a gondola. They will be sold at this year’s Lisle (neé Naperville) meeting, October 20-23, at the registration desk according to current plans. The logo is like the earlier ones.

Is this entire story just about shirts? Well, pretty nearly. The FOTFC dinners got bigger and bigger, and harder to manage financially, so we stopped doing them a few years ago. The Lisle meeting will have such a dinner, though, this time managed by the convention organizers, not by Richard and me. We will see how it goes. But the real point is that anyone who likes to model freight cars (and study the prototypes) qualifies as a Friend of the Freight Car.
Tony Thompson
Posted by Tony Thompson at 2:22 PM