In a previous post on this topic (Waybills-7), I described some tentative steps toward waybilling “through” cars, that is, cars which are moving from staging to staging and do not have any activity on the layout beyond movement in a through train. That post is visible at:  http://modelingthesp.blogspot.com/2011/05/waybills-7.html.
The green “through” bills described in Waybills-7 are in fact in use, but I am beginning to replace them with true waybills, which carry off-layout origins and destinations. Some of the ideas for these have originated in the work done on Otis McGee’s waybills. Since his layout is heavily oriented toward bridge traffic, numerous waybills have been created (or are in the process of being created), and in many cases the loads represent cargo which may have moved over the Coast Line, and can thus be used as through bills on my own layout.
Most of the shipper-consignee pairs being identified are derived from the OpSIG (Operations SIG of NMRA) database, which is available at their website, www.opsig.org, under “Online Resources,” and then “Industry Database.” In addition, I am using the reprinted Shipper Guides for GN, RI, D&RGW, UP, Mopac, T&P and Milwaukee Road (some of their info is already entered in the OpSIG database). All these except the D&RGW are available through Rails Unlimited (website: http://railsunlimited.ribbonrail.com/ ).
As I’ve mentioned in connection with the waybills for Otis, it’s possible to operate cars in both directions loaded, or in both directions empty, just by choosing the paperwork for that car, in addition to the perhaps-obvious cycle in which a car is loaded one way, empty the other. (This of course only works for closed cars, as an open-top car is visibly either loaded or not.)
For example, a waybill for a cargo such as can-closure machinery, from Consolidated Canning, Atlanta, Georgia, to Oregon Cherry Producers, Salem, Oregon, routed via the Southern to New Orleans, then via T&NO and SP, could well move via the Coast (as well as the Shasta Division), and could be used on either layout. Here is the original waybill for the Shasta Division: 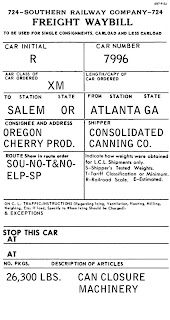 Here is the corresponding bill for my layout, also as a through car, with a different type face used: 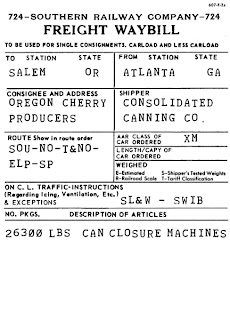 Both bills are of course Southern Railway in origin and the bill header reflects this. An important difference between the two is that the McGee bill specifies a particular car in which the load is carried. My bill can be assigned to any XM car for which I have a car sleeve.
Here’s a perishable bill which represents through traffic on Otis’s layout, again with a specific car identified in the waybill for the “car-card-free” system Otis is adopting, and one which could readily be re-made for the system on my layout.

As another example, I have the Adam-Hill Company, a South San Francisco distributor of mechanical power transmission parts, along with bearings, hoses, tubing and fittings. In the 1950s, Adam-Hill received some of its material by rail. Among their long-time suppliers is Warner Electric Brake Company, located in South Beloit, Illinois (near the Wisconsin border), on the Milwaukee Road. Shipments directly west on the Milwaukee through the Pacific Northwest might well come southward on the Shasta Division  (a through load for Otis) or might move via St. Louis to unload a partial shipment at Los Angeles (a through load for me). Another possibility might be Union Gear & Sprocket in Pawtucket, Rhode Island on the New Haven, another long-time Adam-Hill supplier.
Here is a Milwaukee Road waybill of a Warner load for Otis: 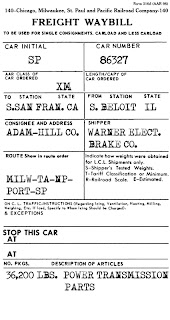 These examples should suffice to indicate the kinds of waybills being created at present for through cars.
I am still exploring ways to make Otis’s through waybills more flexible, because they can in principle be applied (and in my view should be applied) to multiple cars on the layout. I will probably simply reprint some waybills several times, each with a different box car number on it, and we will see how that works in operating sessions.
Tony Thompson
Posted by Tony Thompson at 1:16 PM