Operations: role of the agent

In previous posts I have mentioned how a town agent functions in my waybill system. Just as in the prototype, a person acting as an agent at a model location has a number of responsibilities. As I mentioned in my post about Equipment Instructions, as part of modeling Coast Line freight traffic (see: http://modelingthesp.blogspot.com/2011/01/modeling-freight-traffic-coast-line_30.html ), agents had to know how empties would be handled, because they prepared the Empty Car Bills for movement of newly unloaded empty cars.
They also prepared waybills for newly loaded cars, and handed both kinds of bills to the crew which would pick up those cars. And if there was an empty which could usefully be “confiscated” (as it is termed) for loading, instead of sent homeward by the reverse of its inbound route under load, the agent makes that decision and informs the crew.
All these duties are included among the jobs described in my article in the October 2011 issue of The Dispatcher’s Office, the OpSIG magazine, and a corrected version of that article (to remedy errors which arose in the production process) is available via Google Docs, with a link in my post on this topic, at http://modelingthesp.blogspot.com/2011/09/my-article-in-dispatchers-office.html.
In modeling, the job of local agent is usually combined with that of operator, so that train orders or other operational paperwork can also be handled. But on many railroads, including the SP, jobs designated as agent-operator, that is, with combined duties, were rare. If an agent was needed at a station, normally it was because there were sufficient agent’s duties, and agents usually worked a daylight shift. Operators, on the other hand, if at a busy location, could well work all three shifts.
On some layouts, the job of agent may also have duties such as selecting waybills to simulate shipper demand for cars, though in my system that is handled separately from any agent (and of course on the prototype, the shippers, not the agents, created demand). But the core duty is receiving waybills from crews who are delivering loaded cars, and providing waybills and Empty Car Bills for cars being picked up, and directions for car confiscation, if any.
What if there is no space in the layout room for an agent at a town which would otherwise require one? The person acting as agent can, of course, show up only when a crew needs paperwork to be handled. But an alternative is the use of a “bill box.” This is a box, on the outside of the depot at many prototype locations, locked with a switch padlock. If no agent is on duty, the crew can open the bill box and acquire any paperwork left for them (along with messages which may be needed to direct their work), and on departure can leave behind any paperwork destined to the agent.
In some ways this is both simpler and more realistic for model operations. Years ago, when I used the 3 x 5 car cards of the Doug Smith-Allen McClelland type, I had built clear plexiglass racks for car cards, which hung on the side of the layout like this:

This rack had “SPOTTED,” “HOLD,” and “PULL” slots, and at front were pickup and setout slots, and a holder for service slips, completed waybills, etc. But now with the use of a bill box, this can be eliminated. Today it looks like this: 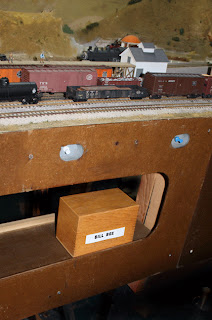 Of course a filing system inside the box is still necessary to keep industries separate and so forth, but no rack intrudes into the aisle, and bills are out of sight.
Both photos show the same town (now called Shumala), and there is a long shelf under the town for tools, soft drink cans, etc., which nicely accommodates the box. Formerly the rack was at the other end of the same shelf. When I operate a cycle of switching by myself (a wonderfully soothing process, by the way), I can use the paperwork system in the box, and if a visiting crew is doing the work, they too simply use the box if no one is designated as agent.
Some of the details of how the agent’s job works will require discussion of my system of “demand-based” waybill flow, that is, how the waybills are selected in the first place, based on shipper demand. Posts on that subject are forthcoming. But this post summarizes the basic agent’s job as I see it.
Tony Thompson
Posted by Tony Thompson at 5:27 PM