I wanted to add a few model photos to my previous post about the BAPM event on June 23. These are only a few of the models I admired and photographed. Three other people, Rob Sarberenyi, Harry Wong and Cyrus Gillespie, all took more extensive photos, so if you want to see more comprehensive coverage of the model displays, their photo sets are at, respectively: http://www.pbase.com/espeef5/bapm_meet_2012 (Rob); http://www.pbase.com/tracktime/bapm2012 (Harry); and http://www.pbase.com/cg_shops/bapm_2012 (Cyrus). 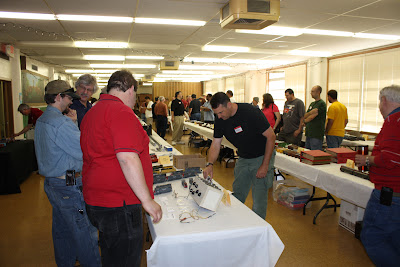 As I mentioned in the first post on BAPM (which you can view at: http://modelingthesp.blogspot.com/2012/06/bapm-bay-area-prototype-modelers.html ) there was a good crowd all day, circulating among the displays and schmoozing in the aisles. I really liked seeing Paul Chandler’s method for building lumber loads in an efficient manner (I won’t go into it here because it may be appearing in the Southern Pacific Society’s magazine Trainline). Here is a flat car with two of Paul’s lumber stacks:

Notice the markings crayoned onto the loads, a familiar sight on the prototype. The car carries the SP Society’s 1949 bulkheads.
I really liked Mike Faletti’s Milwaukee mill gondola, modified from the recent Athearn offering, with terrific representation of rust on the interior. The photo conveys the overall impression, but in person it was extremely realistic.

Dave Pires showed some nice open-car loads, pipe and so forth, and here is just a sample of what was there:

Harry Wong had an in-progress SD9 to show, and I wanted to include this as a representative of what many modelers do at RPM meets: bring in-progress models. Such models are of course most revealing in that they show all the detail parts and modifications which have been made (so far) to the base model. (Click to enlarge.)

Tim Keohane has been duplicating prototype graffiti on modern freight cars for some time. He showed a number of fine examples, in each case with the prototype photo right next to the model. I will just show one example, from an Athearn kit: 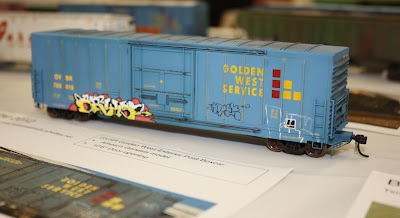 Finally, I wanted to show one of the few non-HO scale models displayed (the paucity of N scale was especially surprising). This is Bo Liljeberg’s O scale hopper, built from a Henry T Productions epoxy kit.

This small sampling can only suggest the richness of the entire display, and if you want to see more, I urge you to visit any of the three links provided in the first paragraph at the top of this post, where very many more photos are available.
Tony Thompson