In my first post on helium cars, I provided a brief summary of historical background, including some photos, and showed how I approximately reproduced the distinctive 100-ton trucks which were used under these cars. At that point the next step on the AHM model was that the body needed some upgrading of details. (Here’s a link to that previous post: http://modelingthesp.blogspot.com/2012/04/helium-cars-part-1.html .)
To complete the model truck comments in the prior post, I used Reboxx wheelsets in the trucks, and found for these Model Die Casting trucks that I had to use the rather short 0.980-inch axle length to get free-rolling performance.
For upgrading, I replaced the grab irons on sides and ends with wire. Side grabs are standard, meaning that the molded-on bolt heads are 18 inches apart, which is a widely used grab iron size. However, each end of these cars had distinctively different locations and styles of grab irons, as can be seen below in a photo of a B end from the clinic handout by Jay Miller. (His page is at: http://www.atsfrr.org/Reviews/HO/Freight/Helium/Index.htm  and at that site you can also download his handout.) Note that the grabs are painted black, in contrast to the medium gray body. All my model grabs were made from brass wire and secured with CA; side grabs were standard Westerfield 18-inch width but a few end grabs had to be custom-fitted using 0.012-inch wire. 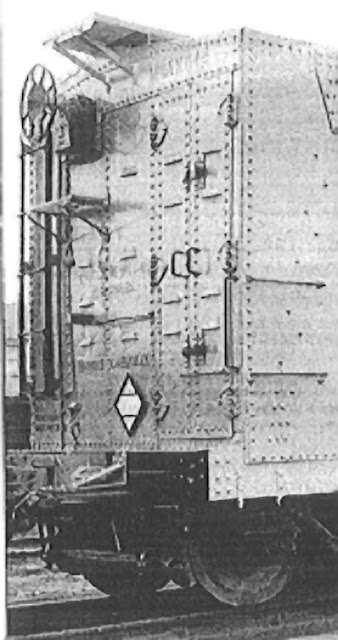 Not all details visible here will match the AHM model, as this photo shows the end of a 1960-built car, but safety appliances appear to be the same. The Universal brake wheel in this photo is not typical of cars built before 1960, when most helium cars seem to have had Ajax hand brakes. I used a Kadee Ajax wheel.
Sill steps were replaced with A-Line “Style A” steps, using the bracing block technique I described in an earlier post on installing metal sill steps (if interested, see: http://modelingthesp.blogspot.com/2011/12/modeling-project-m-box-car.html ).
In the 1950s, these cars still had wood running boards. I used a surplus Red Caboose “wood” running board, which just barely fits the AHM car body. The model was now ready for painting. (I will remove the lame lettering before doing any painting.)

In this next view you can see the end grab irons and brake gear better. 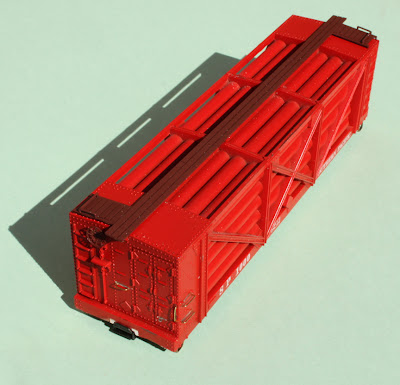 Since my modeling year is 1953, well within the Navy ownership period of the helium cars, I will be painting my car light gray (with black accents, as noted).
I have been jockeying several projects to set up efficient use of spray booth and airbrush time, so hope to get this model painted in the next few days.
Tony Thompson
Posted by Tony Thompson at 10:19 AM