Here is an attractive project I haven’t done, but got interested in researching after Arved Grass sent me some information and some questions (for which, my thanks). It all relates to the new Accurail HO scale steel refrigerator car with plug (or sliding) doors. The car is intended to represent a Fruit Growers Express car, but has a lot of similarities to PFE’s Class R-40-26, the first plug-door production cars built for PFE.
Right away, some will have a question: is the similarity a coincidence? Was the car perhaps a builder design, purchased by both PFE and FGE with a few buyer-specified details? Or did one of them design it, and the other company borrow the drawings? I don’t know the answer for certain, but when I interviewed Earl Hopkins some 20 years ago (he had retired as PFE’s Chief Mechanical Officer), he went through the list of PFE car classes with me and identified which ones were PFE designs, and which were car-builder designs.
Among the ones he specified as PFE designs was Class R-40-26. So did FGE have access to that design? Earl made it plain that the mechanical forces of PFE in the 1940s and 1950s had a warm relationship with their counterparts at FGE, partly because the two competed directly almost nowhere, and also because, as Earl put it, the mechanical staffs of the two organizations hit it off and got along well together.
Among his examples of this cooperation was a very extensive and complete sharing between the two organizations of designs, developments and improvements in the early mechanical refrigerator cars, extending to test results on mechanical components by both staffs. I would guess that if FGE wanted to examine or even build the PFE design for plug-door cars of Class R-40-26, they would readily have been granted access. I don’t know the car history on the FGE side, so I have no idea if FGE followed PFE’s design, but I am sure it would have been possible.
Getting back to the Accurail model, here is the car side, as represented in their on-line artwork from a forthcoming car:

It is striking that many details and dimensions do match the PFE R-40-26. But there are some differences, too. To see them, compare the artwork above with this photo of a new prototype car (PFE photo, my collection):

The side sill of the PFE prototype is “tabbed” rather than straight, which is easy to fix with some judicious cutting and filing of the model’s side sill. The PFE car has a round black “fan plate,” a dummy reminder that the car had fans, and a fan control box below the side sill. It also has differently located placard and route card boards. Each of these details would need to be added to model the PFE car.
What may not be noticed unless you click on these images to enlarge them, is that the Accurail car side has single rivet rows at each side sheet panel edge, while the PFE car has double rivet rows (there was a hat-shaped post behind each PFE panel seam, and the side sheets were riveted to both “feet” of the hat). For many modelers, this would definitely be something to ignore, but it too is fixable.
The answer is Archer rivets. These are three-dimensional resin objects deposited on decal film. You apply them like any decal (taking care not to knock them off the surface). The set that has the closest wider-spacing rivet rows is Archer HO Surface Details 25 (there is also a set 30, which is for Alternate Center Rivets as on box cars). You can purchase them on-line at: www.archertransfers.com.
If you were doing all these corrections, you would probably have to repaint and reletter the model. I have not yet seen the Accurail model decorated for PFE (their model number 8504) but two different modelers who have one of the models say that the color does not match the color chip for PFE orange in the back of the PFE book (Thompson, Church and Jones, Pacific Fruit Express, 2nd Edition, Signature Press, 2000). An Accurail representative has confirmed the incorrect color (and apologized). If that is bothersome, you may want to repaint anyway.
Incidentally, if you do repaint, you can re-letter with Microscale decals. Set 87-501 does a good if not great job. They are currently in stock at Microscale, and you can purchase them on-line if your local hobby shop does not stock them; go to http://www.microscale.com/products.htm and click on the railroad cars at upper right.
After all that commentary about the car sides, what about the roof and ends? The roof is the correct diagonal-panel design, with the right number and style of panels, and the end is actually very good overall. I show below photos of the model and prototype ends. The only discrepancy is that the Accurail end has poling pockets, while the PFE car does not, and they are easily removed from the model. The prototype end view is a PFE photo from my collection, and the model end sprue photo was provided by Arved Grass. 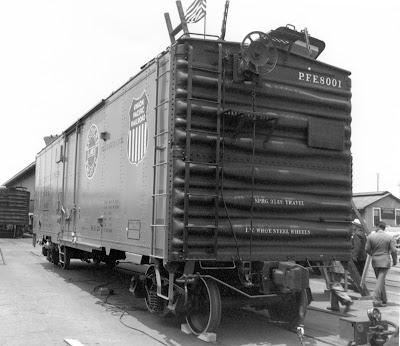 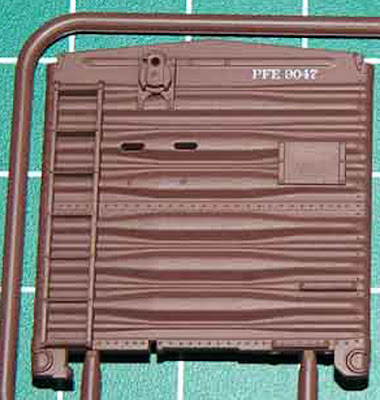 You can readily see that the ends match well, including the rarely-modeled top major rib in ends like this, which has a flattened bottom edge, rather than being symmetrical like the other ribs. Kudos to Accurail for getting this right.
I have a couple of models of Class R-40-26 already, a Challenger brass car (received in recognition of information I supplied for making the model), and an Athearn kitbash using Frank Hodina resin moldings of doors and roof, but the latter car will likely be retired in favor of a so-far-partly completed Sunshine resin kit. So I don’t know that I will attempt this Accurail kitbash, but it’s a relatively straightforward project for anyone wanting models of this significant PFE car class. And by the way, I will probably describe this project in briefer fashion for my modeling column in the Southern Pacific Historical & Technical Society magazine, Trainline.
Tony Thompson

Posted by Tony Thompson at 9:59 PM