It’s been pointed out to me that I was remiss in not commenting on the paint scheme for the PFE Class R-40-26 cars. I did show a prototype photo of a new car in my original post on this topic (you can view that photo at this link: http://modelingthesp.blogspot.com/2012/06/kitbashing-pfe-r-40-26.html ) but I didn’t comment beyond that.
This PFE class of 2000 cars was built between July 1951 and May 1952 at PFE shops, the first 1175 cars at Los Angeles and the balance at Colton. They were numbered 8001 to 10000. In terms of my proportioning of my model reefer fleet to the prototype PFE fleet, at one model for each 1000 prototype cars, I would need two R-40-26 models. I discussed that proportioning of 1 to 1000 cars in an earlier post, which you can read at: http://modelingthesp.blogspot.com/2010/12/choosing-model-car-fleet.html .
In June 1950 PFE adopted a paint scheme with the Union Pacific emblem, formerly painted in red, white and blue, in black and white only. In June 1951, right before the start of R-40-26 construction, further changes were made. First, the entire car side, including side sills and sill steps, was orange, with no black trim (except for the black fan plate). Second, the SP emblem was placed toward the B or brake end of the car on both sides of the car, its traditional location before the 1946-1951 period (during which the SP emblem was to the left, the UP emblem to the right, on both sides of the car). This meant, of course, that the two car sides were not identical after June 1951, but had the SP and UP emblems reversed from one side to the other.
Here is the Accurail website photo of their new plug-door model as decorated for PFE. The SP emblem is located correctly in this view, but since only one side is shown, I can’t tell if it is properly reversed on the other side. As I mentioned in my initial post about these cars (link in the first paragraph, above), the orange color isn’t correct. And note that the sill steps are black instead of orange. 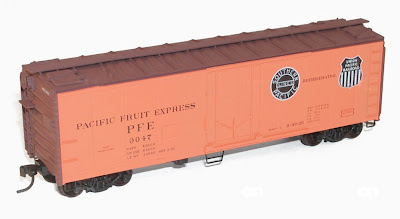 Note also that this Accurail lettering does not have the 1-inch stripes above the initials and below the car number, as all or nearly all the PFE R-40-26 cars did have when built. The use of these stripes would be discontinued by PFE in the spring of 1952, about the time construction of R-40-26 cars was completed. It is not completely clear whether the last cars built received stripes or not. Those cars were LA Shop cars, roughly in the 9000-9175 series, so it is possible that the Accurail scheme is correct for an as-built car numbered 9047, or could represent a repaint.
As I mentioned in the first “update” post, Microscale set 87-501 has all the lettering you need to reletter this car if you have repainted it after correcting details, or if you have added details to an undecorated car. I’m personally not thrilled with Microscale’s lettering in this set, as it looks too thin to me, compared to prototype photos, but at least all the elements are there.
One other detailing point: I can’t tell from the Accurail photo above, what the running board type is. But most if not all of the PFE R-40-26 cars had Morton running boards.
Incidentally, for those who may not realize it, PFE paint schemes are described in some detail, and extensively illustrated, in the PFE book, with a summary and paint chips on page 418 (A.W. Thompson, R.J. Church, B.H. Jones, Pacific Fruit Express, second edition, Signature Press, 2000, and available for direct plurchase on the website at: www.signaturepress.com)
Tony Thompson
Posted by Tony Thompson at 11:37 AM