In my previous blog post on this topic, I described an idea I had, which was to figure out some way to incorporate the frame of the placard holder into the model placard we apply on tank car placard boards. (It’s available at this link: http://modelingthesp.blogspot.com/2013/10/model-tank-car-placards-refinement.html .) Since then I have been amazed at what I have heard.
I said in that post that I was going to pass along my idea to decal manufacturers, hoping there might be some interest. I would have been happiest to hear about a one-piece placard decal, which incorporated both frame and placard in one, but certainly could use a decal just representing the frame, to apply over a model placard. To my astonishment, Microscale responded that they already have such a set ready to release. It is tentatively scheduled for November 1 of this year, and is Mini-Cal set MC-5030. With Microscale’s permission, I reproduce the artwork below. (Although this set isn’t released yet, many readers probably know that you can order Microscale decals on line, at: http://www.microscale.com/ .) 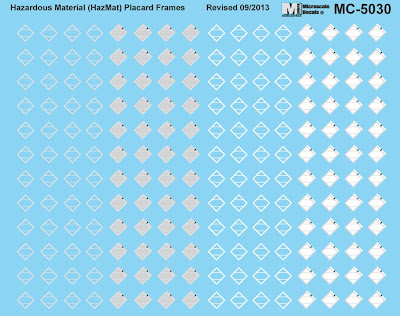 As is evident in this artwork, all frames are shown as white or metallic silver, perhaps all right for highway trucks but certainly not typical of railroad tank cars in most years. But I am told that Microscale will likely revise this artwork to make a fair number of the frames black, as we need for 20th-century eras of tank car use. So  I, at least, will need to wait and see whether there are a goodly number of black frames in the final decal set, before I know how useful set MC-5030 will be for me.
Other points: about half the frames also include the retainer clip typical of modern Haz-Mat placard holders, but not applicable, I believe, for tank cars prior to the 1970s. These can either be ignored or cut off. There is also a size issue. Even though placards are a standard size and have been for many years, model manufacturers seem not to grasp this, and model tank cars have been produced with a wide range of placard board sizes. You can of course add a thin sheet of styrene of the correct dimensions over a too-small placard board, as I have done in a few cases.
Lastly, another decal maker has expressed interest in a one-piece version, that is, with both frame and placard all in one decal. This will be a great convenience, assuming it materializes, and I will say more about it if it progresses toward reality.
Tony Thompson
Posted by Tony Thompson at 10:19 AM