In the previous post on this topic, while giving some general comments and a few statistics on my freight car fleet (you can read that post at this link: http://modelingthesp.blogspot.com/2013/10/evaluating-freight-car-fleet.html ), I mentioned that a lot of the change in my fleet of cars has come about as older and less detailed or less accurate models are replaced with better ones.

Here is just one example of a car replacement which represents an upgrade. For some years, I had rostered a single representative of SP’s Class B-50-22 box cars, a 50-foot single-door car. The old Athearn kit of this type was a stand-in, partly because of the unfortunate Athearn roof, for some reason created with one too few panels (the same is true of the Athearn double-door automobile car). A number of other details are likewise incorrect for SP, such as the pattern of side panels, and the sharp-corner Dreadnaught end, and of course molded-on parts like ladders are a drawback. But with details upgraded, such as wire grab irons, door claws removed, brake step extended, and scale-size Ajax brake wheel, and so on, as I have described in several previous posts about Athearn cars, it looks okay.

This model has now been given away.
The best replacement is the Proto2000 model of this car type, having a correct roof, door, six side panels on each side of the door, and W-corner-post ends. It also has free-standing details, particularly evident on the car ends. The only evident things needing replacement are the running board, which should be Apex steel grid (I used Detail Associates Part no. 6204 for this), and the hand brake, which should be Klasing. As there is no decent HO scale Klasing hand brake at present, I used a similar-appearing Equipco by Kato. 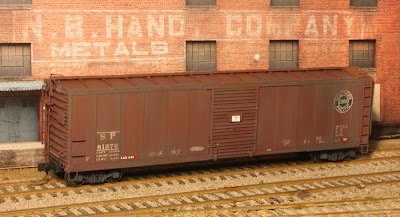 Note I added one of the Jaeger placards about auto parts to the placard board, from their set #2100.
The weathering here is fairly severe, as this is a pre-1946 paint scheme for my 1953 layout era. I used my usual acrylic paint technique, outlined previously (you can download the handout from the joint clinic on weathering techniques, written by Richard Hendrickson and me, at the following link: http://modelingthesp.blogspot.com/2011/10/weathering-clinic-handout.html ).
This is not a particularly important replacement, and I only show it because it is a recent one. But the same kind of process continues in my freight car fleet, upgrading to more accurate models as the opportunities present themselves.
Tony Thompson
Posted by Tony Thompson at 11:13 AM