In my first post about constructing my new town of Santa Rosalia (see: http://modelingthesp.blogspot.com/2013/09/constructing-santa-rosalia-staging-under.html ), I showed the construction of the staging which is to be located underneath the town itself. Santa Rosalia is at the end of my mythical Southern Pacific branch line, as I depicted in an earlier post (you can see it at: http://modelingthesp.blogspot.com/2011/01/layout-design-locale.html ).
My next step was to install track and electrical feeders for the staging. The L-girder track support is wide enough for two tracks, so I decided to include both of them. Here is a view of experimenting with track spacing.

This installation would require a turnout from the single track coming off the main line (just out of view to left), and the turnout in turn creates a problem. There is no room alongside the staging tracks for a switch machine, nor would it be practical to work underneath the track in the rather limited space there. One possibility might be to try and install an extended throwbar.
The idea here was to install a switch machine on the far side of the adjoining mainline track and somehow to run the throwbar underneath that intervening track. The first step in creating that arrangement was to glue a 1 x 3-inch wood support underneath the roadbed, and add a pair of Homasote spacers to bring the top of the added pad (the blotchy orange piece) to track level. 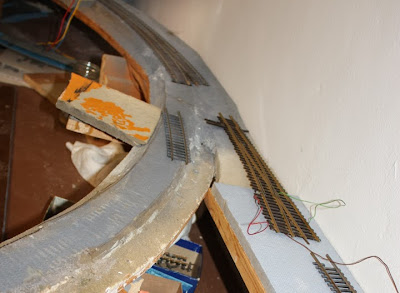 In the left foreground, the mainline loop track has been temporarily removed so the switch machine installation can proceed. The turnout lying on the staging shelf is not in final position, but has simply been moved out of the way of the gluing operation.
My solution to extending the turnout throwbar to the offset switch machine was to use a 1/8-inch styrene tube, through which a 0.025-inch wire could serve as an extended throw bar. This in turn was placed in a trench under where the main line track would be. In the view below, the white styrene tube in its trench is evident. The switch machine isn’t yet connected. And yes, it’s a twin-coil machine. These are positive-acting and dependable devices, in my view, and I like them for hidden track, where the action of a “slow-motion” machine isn’t visible. They also have built-in contacts for frog power.

Some quick testing showed that this arrangement works mechanically. Now I could go ahead and re-lay track on the original main line, as well as lay the staging tracks. Each length of track was given its own pair of feeders to ensure good electrical performance.
When all track-laying was complete, the area of the new turnout and its extended throwbar looked like this, with the main line in the foreground.

This next view shows the entire new staging area, with all electrical connections made.

Of course the next step was a “smoke test”—put a locomotive on the track and turn on the power. If no smoke is seen, run the locomotive over the new track. So I did that, and everything worked fine. Here is a shot of the first train on the new staging tracks.

The tank car, incidentally, is an acid car, which has a scratchbuilt tank and dome; I described it in an article in Railroad Model Craftsman (issue for January 2012, pages 61º66), and showed a picture of the car in a previous blog post (here’s a link: http://modelingthesp.blogspot.com/2011/01/tank-car-projects-for-cocoa-beach-2.html ).
With this staging area done, I can proceed to add the track board for Santa Rosalia, above this staging, which is what I started out to do in the first place. This modest staging track project comprised pretty straightforward track location, distinguished only, perhaps, by the need to design an extended throwbar for the switch near the wall.
Tony Thompson
Posted by Tony Thompson at 9:04 AM