This title, “men in uniform,” refers not to uniforms such as conductors and brakemen on passenger trains wore, but the typical clothing of freight train crews, in my 1950s era. One sees it in many photos, but all too many times in model scenes, one doesn’t see it. Let me start with an example from the Bob’s Photo collection, located for me by Jerry Stewart, who also suggested it should be titled “men in uniform” (thanks, Jerry!). You can click on it to enlarge. 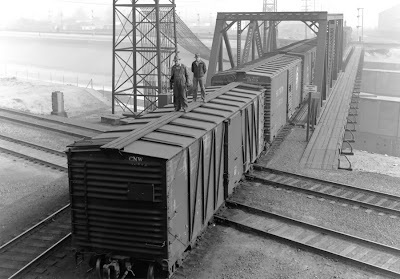 The location is readily identified; the cut is being shoved westward across the Los Angeles River toward LAUPT (possibly to the postal annex), on a rather foggy morning. The photo was taken from Mission Tower, and the train is on SP tracks, crossing the double track of the Santa Fe’s west bank line in the foreground. Unfortunately, the photographer is not identified.
The two men atop the box car both wear fedoras, as was common in the late 1940s and into the 1950s for train crews. The man closest to the camera wears overalls and a denim jacket; the man behind him has on a plaid jacket which looks like wool. This is what Jerry Steward meant by referring to them as “in uniform.” These are the standard working clothes of the era.
Note one important point. They are not wearing hard hats. Modelers of times like the 1950s often compromise by using scale figures with modern hard hats, but these were nonexistent in railroading at the time shown.
Here is another example, with both caboose trainmen wearing overalls. The photo shows picking up orders on the fly at Burbank Junction (SP). It’s a Stanley Groff photo, which I obtained from the Rob Evans collection. 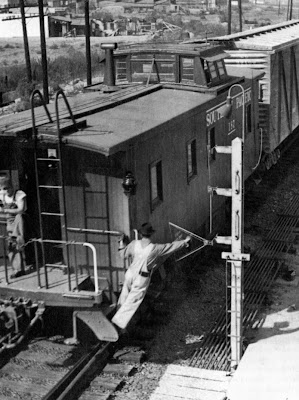 Here again, these are typical trainmen’s clothing, and the hats are a fedora and what appears to be an engineer’s cap in a solid color.
Finally, one more photo (from Southern Pacific) of a trainman waving a highball with a lantern. In this case also, he is dressed in the common clothing of 1950s railroaders. 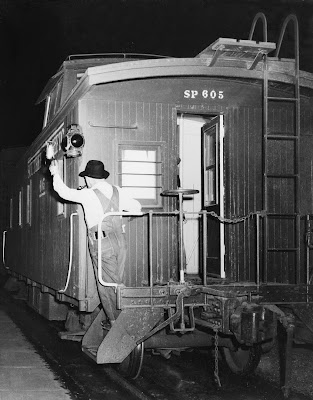 The point? Your scale figures should wear clothing which matches the era. Some commercial figures are correct in this sense, but many are not, either because they are aimed at a later era, or because they represent European clothing. It’s not so true today, but 50 years ago, European and American clothing styles of working people were quite different, and many sets of scale figures are from European companies. Repainting incorrect figures, or choosing correctly dressed figures, is needed for a convincing historical appearance.
Tony Thompson
Posted by Tony Thompson at 9:35 AM