Recently I wrote a couple of posts about opportunities and methods to do tank car placards in model form. In particular, I described the (then forthcoming) Microscale set MC-5030, which provides placard frames (see: http://modelingthesp.blogspot.com/2013/10/model-tank-car-placard-decals-update.html ). That set has now been issued and is available for sale, on line at Microscale as well as in local hobby shops.
The final news on this is not entirely good. Although the artwork I showed in the post cited above was to be revised, in order to add a whole lot more black placard frames, in the final version there really are not all that many in black, as a fraction of the whole sheet. Here is the artwork Microscale shows: 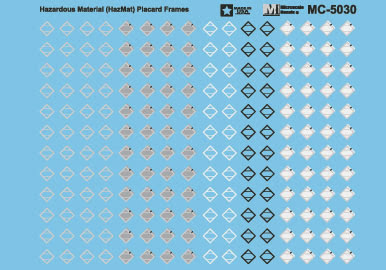 This set is available for direct purchase at: http://www.microscale.com/Merchant2/merchant.mvc?Screen=PROD&Product_Code=MC-5030&Category_Code=NEWRLS&Product_Count=9 .
There are 192 placard frames on this sheet, which, at four per car, means you can use these frames to do 48 cars. But only 24 of them are black, meaning only six cars can get black frames. If you are only going to add frames to a few of your tank cars which already have placards, this may be fine. But anyone who has a whole bunch of tank cars and (so far) no placard frames, is going to have to buy multiple sets. I guess the good news is that these are only $5.00 per set, not as steep as many recent Microscale sets.
I should hasten to add that the foregoing grumbling applies only to transition-era modelers. If you model a more recent era, particularly post-1981, these frames will all be essentially useful, and can be used for highway truck Haz-Mat placards too.
As I stated in previous posts, the ideal arrangement would be to have decals of placards with frames superimposed on them. Then only one decal need be applied to a model placard board. But pending such decals being available, the new Microscale MC-5030 set does permit one to add frames to plain placards.
Tony Thompson
Posted by Tony Thompson at 10:41 AM