My previous post on this topic brought some samples of house car placards from other modelers. (If you like, you can read that prior post at: http://modelingthesp.blogspot.com/2013/11/placards-for-house-cars-prototype.html .) Doug Harding and Stan Jones were kind enough to send me images of additional prototype placards from their collections, and I will show a few of them here.
First is this intriguing placard for eggs, which I would assume was usually applied to refrigerator cars, not box cars, and has the visual interest of being diamond shaped rather than the usual rectangle. It’s from Doug Harding. 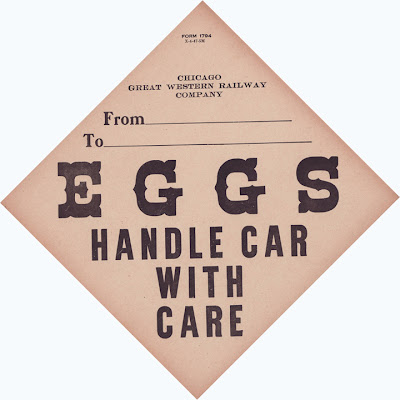 Stan Jones sent what is presumably a temporary placard but could be an interesting addition for operations. It not only requests a reweigh of the car, but restencilling as well, and has the added interest of color. Like many of these placards, it was produced by a railroad (the Maine Central), though many prototype placards were produced by and applied by shippers. 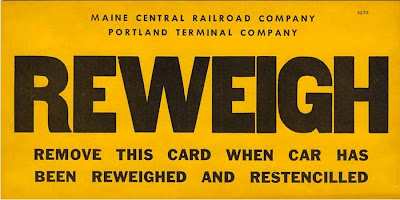 Next is another placard I would associate more with refrigerator cars than box cars, also from Doug Harding. Heaters were used in winter months to prevent perishables from getting too cold. Most refrigerator car owners produced such placards, intended to warn transients or inspectors from going into cars with operating heaters, which were tightly sealed and could build up carbon monoxide inside. 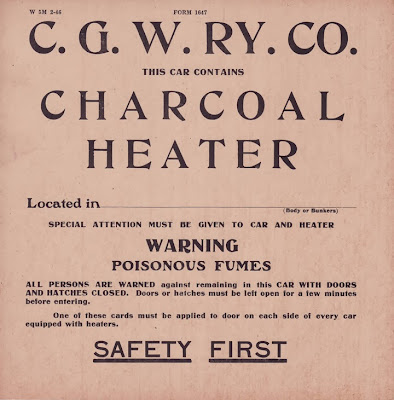 Doug also sent another intriguing placard, most useful for modelers of rural areas, and certainly a vivid color, indicating its priority. 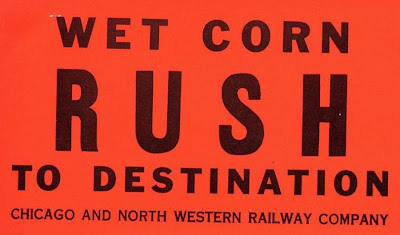 Doug explained to me that corn, once dried, could expand to as much as double its volume if it got wet again, thereby bursting its container (including box cars), so the cargo had to be rushed to destination so it could be unloaded and dried. At that point, it was good for animal feed and little else. But priority was obviously important.
Finally, Doug sent an Explosives placard from the M&StL, identical to the one shown in my post on historical hazardous placards (here’s a link: http://modelingthesp.blogspot.com/2012/03/tank-car-placards-prototype.html ), but a useful reminder that explosives were likely to be shipped in box cars. A model box car with this placard is entirely suitable. 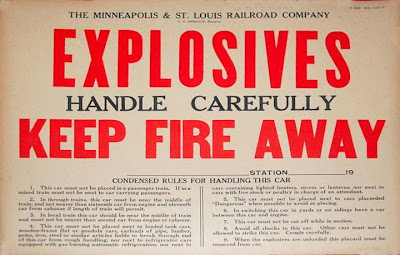 I appreciate the generosity of these modelers in sharing some additional placards. Note the variety of color, shape, and typefaces on these examples. If you want to make up some of your own placards for model use, these will give you some ideas.
Tony Thompson
Posted by Tony Thompson at 11:32 AM