My peninsula-shaped layout, the surviving part of my Pittsburgh, PA layout (see: http://modelingthesp.blogspot.com/2012/03/survival-from-my-old-layout.html ) has a large hill at the outer end. This was intended to provide a reason for the tunnels through which the trackage makes its unprototypical return loop. Hiding the obvious return loops is good, and this hill also serves as a scene separator between the towns of Shumala (Jalama in Pittsburgh) and Ballard.
An alternative to tunnels to hide the turnback loops could have been a “Bellinadrop.” Readers may be unfamiliar with that name. The feature, named for the late Jerry Bellina, is any kind of backdrop which prevents getting a view of both sides of the peninsula when standing at the end, whether you are running a train or are just an observer. To read more about this, you can consult the article by Paul Dolkos in the 2013 edition of Model Railroad Planning (Kalmbach). In my case, the large hill serves much the same purpose.
I showed my fascia treatment of this feature in a previous post (you can see it at: http://modelingthesp.blogspot.com/2013/02/layout-fascia-my-approach.html ). A photo in that post shows well the narrow ocean beach at the base of the cliffs along the seashore. The overall hill size was chosen to be credible as a big-enough candidate to be tunneled (I am kind of uncomfortable with layouts which include tunnels under as little as ten feet of overburden.) Here is a look at about half of my hill. 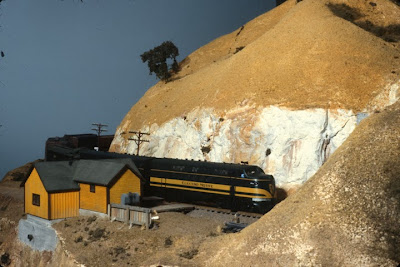 This photo is of the EMD FT demonstrator units, from a photo feature in Railroad Model Craftsman years ago, in which these same brass diesels were shipped from city to city and photographed on many layouts, commemorating the original, national demonstrator tour of these FTs.
When I moved the layout to California in 1994 (in a U-Haul truck), the peninsula end was one of the layout segments, and it was moved in its entirety. But I had to store it in the attic of my first house in Berkeley, and the hilltop was too high to pass through the attic access. The answer was simple: just cut off the top of the hill. It was all constructed of traditional hard-shell scenery, meaning plaster-soaked paper towels, so was easily sliced off. The sliced-off part was intended to be put back someday.
Once the layout was moved to our new home in 2005, I got the major pieces set up and running. The truncated hill was still that way, often occasioning witty cracks from visitors about “California earthquake damage.” The last major segment to be installed was Ballard (see my description at: http://modelingthesp.blogspot.com/2011/09/ballard-2.html ).
As soon as the Ballard track board was put in place, I  installed new track connections. Here is a view onto the Ballard section, looking southwestward (railroad east). The hillside and tunnel portal will cover this track right to the end of the newly added track, at about photo center. There is no fascia yet installed in this view. 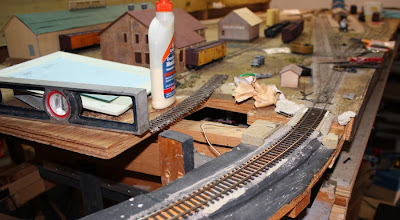 An end view of the peninsula after addition of the fascia looks like this, viewing somewhat from the Shumala side, and showing the SP mainline tunnel. The top of the hill is visibly missing. A piece of screen wire can be seen along the ridgeline, temporarily in place, trying out an approach to rebuilding the hilltop. 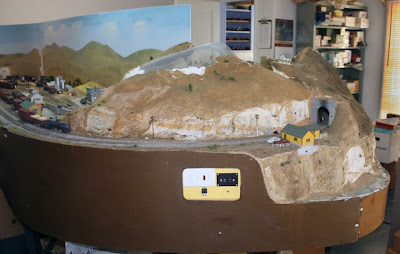 Walking around the end of the peninsula, the hill rises higher, and the fascia is correspondingly higher. 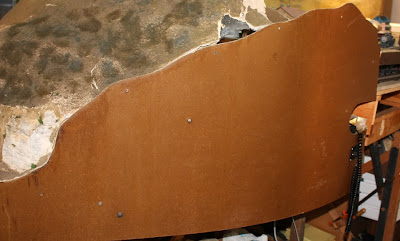 Here the hill remnants are not yet attached to the fascia. The view of the Ballard trackage, second photo above, was taken before this fascia was attached.
But the hilltop is still gone, and from above Ballard, the view below, into the hill, can be obtained. You can picture the entire hilltop having been simply sliced off, in making the layout section fit where it needed to go (as I described above). 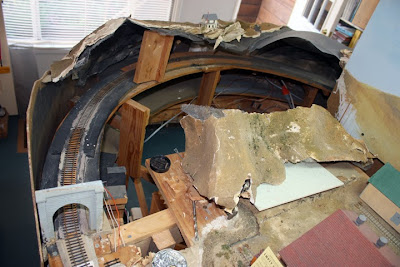 You can see the fascia of the foregoing photo curving around at left, and the tunnel portal is temporarily placed where the track enters Ballard. The tile-roof edge of the Zaca Mesa winery is at right foreground.
The original hill construction utilized old window-screen wire, with conventional hardshell (plaster-soaked paper towels) on top of it, though not really embedded in it. The plan for reconstruction is to install another piece of screen wire in the gap, shown above, then add new hardshell. To the extent practical, I will also reconstruct what pieces remain of the old hilltop, supplemented with more hardshell and papier-maché to tie everything together. But I expect that most of the salvaged section of old hilltop will not be usable, and will simply be replaced.
As that process goes forward, I will report on it in future posts. Neither hardshell scenery nor the fascia treatment are distinctive of themselves, but I thought the process of repairing this kind of layout structure might be of interest.
Tony Thompson
Posted by Tony Thompson at 11:37 AM