I have for some time maintained an inventory listing of my unbuilt kits, partly to ensure that I don’t forget what I already have, and repeat a purchase. But this inventory also serves to permit recognition of the outlines of my future fleet, as well as to identify cars no longer needed, and thus discardable.
My layout in Pittsburgh had about 200 or 225 freight cars in service, with maybe another 25 or so which were serviceable but rarely operated. The latter category might include inaccurate paint schemes, wrong car bodies (at one time I used Athearn box cars to stand in for just about any 40-foot box car), or simply primitive models, such as some old Varney metal box cars. But in total this was none too many cars, and in fact my extensive staging on that layout could have accommodated significantly more cars in service. There was also a stash of unbuilt kits, of which I don’t have records.
Since I’ve moved to Berkeley, three different things have been happening with the freight fleet. First, I have sold or given away a lot of the marginal freight cars in the previous fleet, more than 80 of them so far, and more to go. For example, here is a shot of part of the fleet in Pittsburgh. All but the centerpiece car in this photo (a Detail Associates GS gondola) have been superseded by better models. 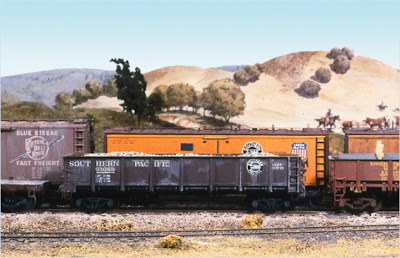 My second change is that I’ve been completing a number of stalled projects, either incomplete or barely started (mostly kitbashes), from those days, mostly fairly good quality cars, and adding them to the fleet. Third, I have been building not only those stockpiled kits I mentioned, but also buying new ones. I have also acquired plenty of ready-to-run cars, some of which need correction of detail parts and all of which require weathering. Both these sources of new cars are evident in this photo of my staging table, prior to installation of the track board for Ballard on top of it. (Click to enlarge.)

So far I have added about 160 new cars to what was on hand in Pittsburgh, many of them replacements for discarded cars.
How do I know all these numbers? I maintain several roster-related lists. One is the inventory I mentioned at the outset of this post, a list of kits in stock, which I created to have something in hand when traveling, and thus helping to avoid duplicate purchases when at out-of-town hobby shops. But as kits get completed, I just move the entry to the bottom of the list and add the date completed, so now this “inventory” is also providing roster information for completed cars.
Second, I have long relied on a list of car locations, identifying exact box, and tray in that box, since otherwise I would have to root through storage boxes, layer after layer, for much of the fleet. (I described my box storage, and other off-layout car positioning, in a prior post to this blog; it’s at: http://modelingthesp.blogspot.com/2011/12/operations-car-flow-and-car-storage.html .) But I can readily count the entries in the “locator list” to see how many completed cars are in storage.
The total fleet is not a great deal larger than when I left Pittsburgh, but I think much better quality overall. It also better meets the needs of my new layout, focused on the particular industries I have or am planning. I can readily examine these changes by means of my car records. There is no real need to track your freight car fleet in as much detail as I have done, but even a simplified version of my system would permit an interesting backward view, once you maintain it for awhie.
Tony Thompson
Posted by Tony Thompson at 10:48 AM