The title quotes the question I’m often asked, usually by non-Californians. And many times, when I’ve mentioned coal loads on my layout (that is set on the Central California coast in 1953), I get expressions ranging from amusement to incredulity. Now of course, some of that response is quite sensible. California is not a coal state. Very, very little coal was ever mined in California, and most of it was terrible quality, disappointingly high-ash coal (lower BTU, more ashes to clean up). So the traditional kind of railroad coal traffic, outbound loads from coal mines, was indeed all but non-existent in California by 1953.
But the other end of coal traffic, coal arriving to consumers, is another story altogether. Coal did arrive from several places outside California, and was used primarily in industrial settings. The biggest user of this coal was the Kaiser steel mill at Fontana in southern California. Most arriving coal in California came from the coal fields in eastern Utah/western Colorado. Carriers were D&RGW, UP, and the Utah Coal Route. For years, this traffic moved predominantly in GS gondolas. In 1952, D&RGW began to buy conventional 70-ton triple hoppers, and I can model those in addition to the GS gons. Here is an example on my layout, using an old Roundhouse offset-side model for the hopper. 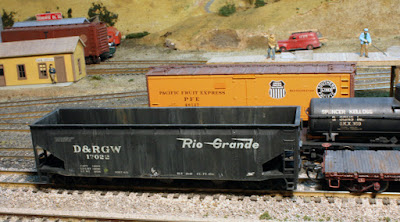 But any knowledgeable D&RGW modeler will realize at once that this is a stand-in model at best. The only Rio Grande offset-side hoppers I know of were ballast cars, with longitudinal-dump doors.  The number series of the Roundhouse models, 17000–17199, would represents car built in 1957, although Roundhouse has lettered the model with a 10-48 built date, an entirely imaginary data item. Moreover, the 1957 cars were not offset-side cars. I will eventually replace this model, but it serves for now as an alternative to the familiar GS gondolas in D&RGW coal service.
Those D&RGW gondolas have long been a modeling challenge, because instead of the very common 40-foot length of such cars on nearly all railroads, D&RGW built most of them 46 feet long. In addition, most of the cars also had distinctive side sheets and trucks. This challenge was met by W&R Enterprises with a brass model, including the right trucks, and I do use one of these cars as part of my coal traffic. It’s shown below.

The Utah-Colorado coal fields are not the whole story of California coal traffic. There are very interesting published accounts relating to California coal and coke use during miners’ strikes in Utah/Colorado, with coal coming from the southern Illinois coal fields and even from as far away as the Pennsylvania/West Virginia/Virginia area. I will probably model this by occasionally operating C&O or WM or N&W hoppers which are in my fleet; all three roads did have substantial off-road customers for coal, much of it marketed through fuel brokers.
As I have indicated in previous posts, one important destination for coal on my layout is the facilities of the Southern Pacific itself (this is discussed here: http://modelingthesp.blogspot.com/2016/06/coal-traffic-on-my-layout.html ). Well into the 1950s, SP still relied on coal for fuel in section houses, depots, roundhouses and other on-line structures, as well as for use in caboose stoves. Accordingly, I will model some coal deliveries. This is the other part of the traffic discussed in the post on my plan for hopper cars ( http://modelingthesp.blogspot.com/2011/03/choosing-model-car-fleet-7-hoppers.html ).
So my coal deliveries are primarily in GS gondolas, and one interesting example is one of the old Ulrich white-metal models, lettered for the Utah Coal Route (a joint operation of the Utah Railway and the Los Angeles & Salt Lake subsidiary of Union Pacific). This model does not accurately model the prototype, but is similar in appearance. It’s shown here during a run-around move at Shumala on my layout, fully loaded with coal. 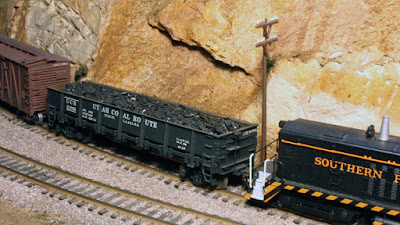 This is my background for a certain amount of coal traffic on my layout, even though the layout is set in coastal California. It’s a far cry from Appalachian railroading, but it suits my locale.
Tony Thompson
Posted by Tony Thompson at 12:21 PM