In the previous two posts about Pullman heavyweight sleepers, I described m goals in making the particular car choices for modeling, and (in the first post) gave complete citations to my prior, more detailed modeling posts, as well as to the complete Mainline Modeler magazine article series. The previous post, Part 2 (see it at: http://modelingthesp.blogspot.com/2018/02/my-pullman-projects-part-2.html ) has a link to Part 1.
I wanted to do one more distinctive body style, the 10-1-1 (10 sections, 1 drawing room, 1 compartment), and SP did own such cars. That the four car types presented in this Mainline series are all different (the 12-1, 8-1-2, 10-1-1, and 14-section) is shown by this comparison of broadside photos from the Mainline series. 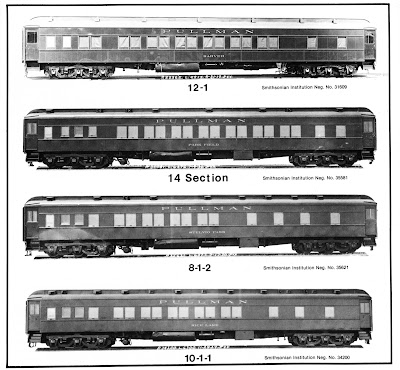 Whether you count the paired windows of the sections (following the hint I gave near the end of the previous post), or look at the aisle windows at the right end of each photo, you can see how different these cars are in their appearance.
As with the other car types described in the Mainline series, there was a very helpful drawing showing the windows that had to be moved (or replaced), what type of window, and where they would go. The example below shows the style. I found this very easy to use. 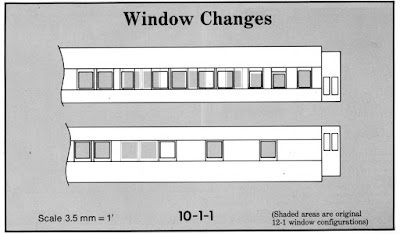 The idea here is that the shaded windows are the original locations, and the outlined windows are what should be there when the work is completed. Good way of presenting this information.
When done with the body of the model (described more fully in a post in my earlier series, namely this one: http://modelingthesp.blogspot.com/2014/07/modeling-sp-passenger-cars-sleepers.html ), I had to decide on paint and lettering. Here I drew upon a superb source of information for the Southern Pacific passenger car modeler, the series published by the SP Historical & Technical Society, entitled Southern Pacific Passenger Cars, in six volumes. For the present task, I consulted Volume 2 on sleeping cars. 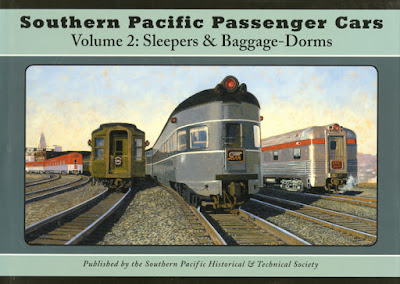 This book can be found at better hobby shops, or direct from the Society at its website, https://sphts.myshopify.com/collections/all?page=2 . Among other things, this reference tells us (Chapter 3) that the most numerous Pullman heavyweights purchased by SP were the 10-1-2 type (not addressed in the Mainline Modeler articles), closely followed by the 12-1 type (the latter car type was the subject of my first post in this Pullman series: http://modelingthesp.blogspot.com/2018/02/my-pullman-projects.html ). Incidentally, if you can’t find or don’t want to find the series of Mainline magazine issues, the entire Hoff series was reprinted in the “Best of Mainline Modeler” book, Passenger Cars, Volume 1 (Phoenix Publishing 1991).
We also learn in the SPH&TS Volume 2 that SP only purchased two cars of the 10-1-1 configuration, and by 1953, only one of them was painted Dark Olive Green. That made my name selection for my 10-1-1 model was very simple: Palouse Falls, as I discussed in my more complete description of the model work (see it at: http://modelingthesp.blogspot.com/2014/07/modeling-sp-passenger-cars-sleepers.html ). Here’s the completed car.

With this model, my basic SP heavyweight and Pullman fleet is almost done. But what about those numerous 10-1-2 cars that SP bought from Pullman in 1949? Making one by converting from a Rivarossi 12-1 is pretty complicated (as mentioned in the Hoff and Zenk article, Part 4 of the Mainline Modeler series, July/August 1981). I decided I didn’t want to go that far, even though the 10-1-2 is a car type I would like to operate. As of now, I am holding a Branchline kit for one of the SP cars of that type, Lake Sheridan, and will get it built and into the fleet one of these days.
Another point to consider is that Pullman sleepers owned by roads other than SP did operate over SP lines at times. Including such cars seems an interesting opportunity. More later.
Tony Thompson
Posted by Tony Thompson at 9:06 AM