Recently I was discussing heavyweight passenger cars of the Southern Pacific, including Pullman sleeping cars, with a visitor to my layout. I mentioned that I had modified several of the old Rivarossi plastic Pullmans (imported by AHM, or Associated Hobby Manufacturers), following some really good 1981 articles in Mainline Modeler magazine. The modifications were to accomplish other floor plans than the stock model, which is a 12-1 (12 sections, one drawing room).
My visitor was surprised to hear about such conversions and could not remember having seen the Mainline articles. So I opened up my storage boxes and retrieved a couple of the models that resulted. He was quite interested, and asked me to say a little more. I began by saying I’d written a group of blog posts, back in 2014, about the basic approach I used (the links are below). “But then,” he said, “where did you get all the information about the cars you modeled?”
Before summarizing my information sources, and how I used them, let me mention the background from the perspective of my layout. As a first step, I described the basics of the SP’s Coast Route passenger service: http://modelingthesp.blogspot.com/2012/10/choosing-model-sp-passenger-cars.html . This summarizes the things I wanted to accomplish with modeling of Pullmans for passenger service on my layout.
Second, here are the links to my prior sleeper series. They not only describe the process of completing one of the conversions, but give extensive citation to the Mainline articles and to sources of modeling materials:

These show completion of one of the project cars, and some information about others.
Now back to the information and how to use it. The starting point is a Bob Wayner book, simply a reprint of Pullman’s own “live list,” descriptions of all cars in service, whether railroad-owned or Pullman-owned (in 1948, the railroads took over ownership of all lightweight and many heavyweight sleepers; Pullman retained ownership of most of the remainder, for pool service and to support extra movements as needed). 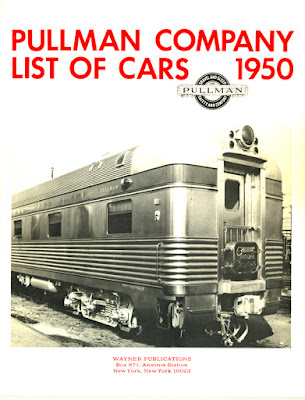 This is not a very interesting book visually, being more like a telephone book inside than most railroad books. But it is packed with information. For example, here are excerpts from parts of the book, showing my information about the 12-1 sleepers I wanted to model for SP service. (You can click to enlarge.) 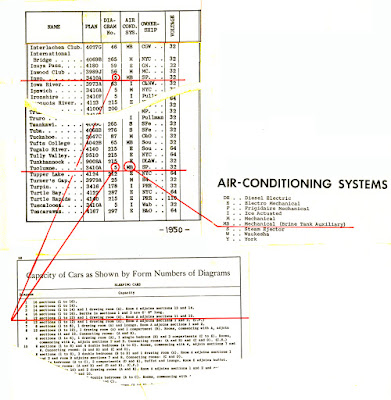 Underlined in the top part, from a book page, are SP 12-1 sleepers Inyo and Tuolumne. Their air conditioning systems are identified as Mechanical Brine, a detail only essential if you are detailing the underbody, but important in that these particular cars were air conditioned. That means adding roof ducts to your 12-1 model. The lower table shows that these 12-1 cars were both “Diagram 5,” meaning Pullman plan 3410A. That’s the common 12-1 floor plan and matches the Rivarossi model.
That’s exactly what I did with both cars, which are otherwise pretty stock Rivarossi models, repainted and lettered (I do insert Kadee 33-inch wheels in place of the Rivarossi undersized and overflanged wheels, and adjust coupling to accommodate Kadee couplers (see the Part 5 post, link provided above). Here are both.

These cars are the same length, though the one in the back looks shorter at this angle.
Even in the 1950s, the 12-1 Pullman was still the dominant type in the fleet of heavyweight sleepers. These two accordingly are, singly or together, in most of my Coast Route trains that include any sleepers. In future posts, I will present the other principal sleepers I have done.
Tony Thompson
Posted by Tony Thompson at 10:56 AM