The title of this post is the official name of what we usually call the “LDSIG/OpSIG meeting,” because it’s effectively hosted by the local adherents of the Layout Design and Operations SIGs (Special Interest Groups) of NMRA, and it’s always held on the football-deficient weekend before the Super Bowl. It’s been organized and run for years by Seth Neumann and David Parks, with help from a number of the usual Bay Area suspects and some from farther away, such as Bruce Morden. It normally comprises a Saturday of clinic presentations, with layout tours on both Friday and Saturday nights, and operating sessions on Sunday. Typical attendance has been around 100 people. I have posted before about this event, including a description of last year’s version (you can see it at: http://modelingthesp.blogspot.com/2017/01/an-op-session-for-ops-weekend.html ).
I was among the four speakers at the Saturday session, presenting a new talk about modeling traffic on the layout. This talk called for a moderately extensive amount of facts to be cited, so I prepared an electronic handout. That of course was the reason for my post on January 26, which can be found at: http://modelingthesp.blogspot.com/2018/01/handout-for-traffic-talk.html .
This year, I hosted a Saturday evening open house for my layout, as I have done in previous years when the Saturday meeting was in the East Bay, for convenience of travel (you can read an earlier post about hosting an open house, at: http://modelingthesp.blogspot.com/2014/02/a-layout-open-house.html ). This year, I think about 30 people came by, though I didn’t really count them. I always enjoy this kind of face-to-face meeting with visitors, because I can answer their questions directly, and can readily discuss layout examples.
I also hosted a Sunday operating session. One never knows who has requested a slot to operate on your layout, and sometimes it may include someone with minimal operating experience. When that’s the case, a layout owner may wish to simplify or reduce the work load of the operators; but of course, if they turn out to be fully experienced people, they will not only be a little bored but will finish work fairly quickly. I decided not to simplify my normal session significantly, and luckily, the people assigned to operate were all experienced, and pretty much breezed through the session.
Two of the operators were Al Daumann, who has operated on the layout before, and Ron Westlund, who you see in the photo below (Al is at left) setting up to start work at Ballard. The various cars visible in the photo all have waybills for work to be done, and Al is consulting the schematic map of Ballard in the timetable. 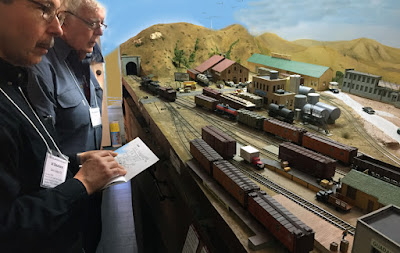 The other pair of operators were Hilding Larson and Paul Deis, knowledgeable operators, who did an impressive amount of planning their work in each town, and then pretty rapidly carried it out with few false moves. Here they are (Hilding at left), sorting cars at Shumala. 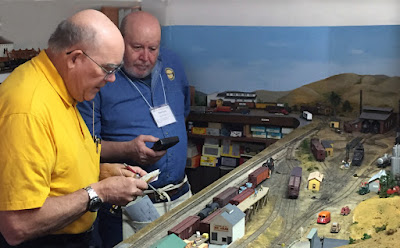 After each crew completes work in the town where they started, the local freight returns from Ballard with all its pickups, to the junction at Shumala, where crews usually choose to trade jobs. That way, both crews get to work both sides of the layout. In the second half of this session, the crews did exchange jobs, and here are Al and Ron doing their turn at Shumala. 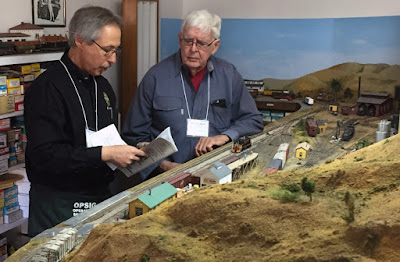 As often happens, I marvel at the creative solutions people have to particular switching challenges. In several sessions, including this one, I have seen switching moves I have never seen before (and would not have thought of myself), but they all get the job done. Makes it fun to watch a session.
The session went pretty well, meaning that hardly any gremlins of significance reared their ugly heads. I did find a disconnected wire (which had been connected all right when I tested the previous evening!) but these things are pretty easy to fix. There were a few small confusions on switching procedures, probably due to my insufficient explanation of what was intended, so that can be cleared up the next time the layout is operated.
This annual weekend event is always well organized, well run, and entirely enjoyable. The success this year just confirms the pattern. I look forward every year to this meeting, and am more than happy to contribute my bit when I can.
Tony Thompson
Posted by Tony Thompson at 10:42 AM