In previous posts, I have referred several times to railroad documents called Shipper Guides or Industrial Directories. Especially in preparing waybills, these documents are of great value, as shown, for example, in this post: http://modelingthesp.blogspot.com/2015/11/waybills-part-44-shipper-guides.html, and in following posts showing additional guides as they were reprinted: http://modelingthesp.blogspot.com/2016/10/waybills-part-54-more-shipper-guides.html . Sometimes these documents can be found at libraries or archives, though you may have to have a long discussion with the librarian for them to understand what you are looking for. I gave the example of a Western Pacific guide in a recent post (you can see it at http://modelingthesp.blogspot.com/2016/11/waybills-part-56-western-pacific.html ).
In my own collection at present, I am using the reprinted Shipper Guides for Rock Island, D&RGW, UP, WP, Mopac, T&P, New York Central, Pennsylvania, GN, and Milwaukee Road. All these are available through Rails Unlimited (website: http://railsunlimited.ribbonrail.com/ ), and there are still more available there, such as New Haven. Recently I attended the 2018 renewal of the Cocoa Beach, Florida meeting called Prototype Rails, and purchased yet one more Guide, a Directory of Industries for the Chicago Switching District. Here is the cover: 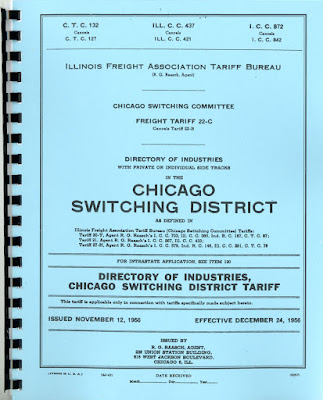 Like many of the reprinted guides, this is part of a tariff series. It’s a 125-page book, and like many of the Rails Unlimited reprints, costs $29.95. In my opinion, it is a true bargain at that price, considering the astonishing density of information inside.
A person might think, “Well, this is just one city, Chicago,” and in one sense, that is correct. But I would make two points in response. First of all, the listings cover 35 railroads which served the Chicago area in 1956, the date of this Guide. Second, this Switching District was a reciprocal switching district for the most part, an arrangement I have described in prior posts (I say “for the most part,” because a few sidings are listed as not in the reciprocal agreement, under a reference mark 2, which states “will not switch for connecting lines”). My two posts about reciprocal switching can be found at the following links;

To illustrate the richness of information, I show below page 78 from this guide, chosen pretty much at random. Note the variety of railroads listed down the right-hand column, and note also the several instances of the number 2 in a circle, which is the reference mark described above. (You can click to enlarge.) 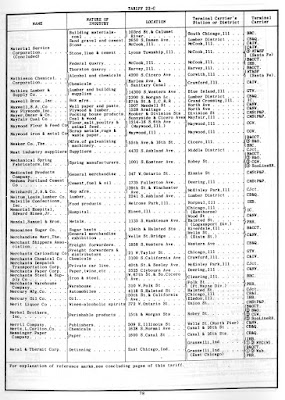 This is actually one of the most informative Shipper Guides I have, just because Chicago was such a powerhouse industrial city, and both shipped and received so many products at so many industrial sidings. Using a Guide like this will greatly enrich your database of industries to use in filling out waybills for your layout.
Tony Thompson
Posted by Tony Thompson at 10:47 AM