Last week the 17th running of the Prototype Rails meeting at Cocoa Beach, Florida was convened. It was hosted and managed, as always, by Mike Brock, ably assisted by Marty Magregian and Scott Dam, and of course program chief Jeff Aley, who also serves as audio-visual troubleshooter. Registration remained at $35. As always, it is pleasant to travel to Florida in January, though this year, outdoor temperatures hovered in the 50s. More important, at least to me, was the indoor activities, which were really excellent this year. And despite severe winter weather in some parts of the East, attendance still exceeded 240, typical of good years at Cocoa Beach.
The hotel ballroom is mostly given over to vendors and modular layouts, and as always, there tends to be a considerable crowd examining the wares for sale. Among the vendors unable to attend due to weather were Funaro & Camerlengo, but partly making up for it was Ted Schnepf’s Rails Unlimited sales tables. In the photo below, that’s Ted in the orange shirt at far right.

The model display tables are a never-failing attraction in one end of the ballroom, and this year was no exception. As he often does, Bruce Smith brought really a big group of models, centered on the Pennsylvania Railroad. Bruce’s modeling era is during World War II, which makes many of his models quite interesting. Here is an overview:

Another nice group of models was brought by Lance Mindheim, two locomotives of different eras, of the Los Angeles Junction Railway, complete with photos of the prototypes: 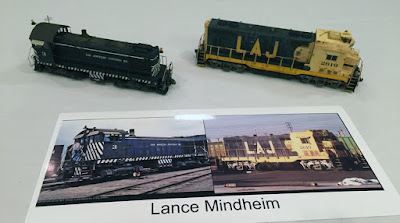 The clinic program this year was outstanding. I won’t go into detail about the whole program (you can see it on-line at: http://prototyperails.com/PDF/Abstractsrev03.pdf ), but will mention a couple of points. First, it is becoming common for speakers to put their “handout” on the internet instead of in paper form. This permits larger handouts without large copying expense, permits far better photo reproduction than Xerox, and allows live links to other sources of on-line information. One who did so was Tom Madden, in an excellent talk entitled, “All Heavyweight Pullmans do NOT look alike!!” Here is his (fairly typical) screen with the handout URL: 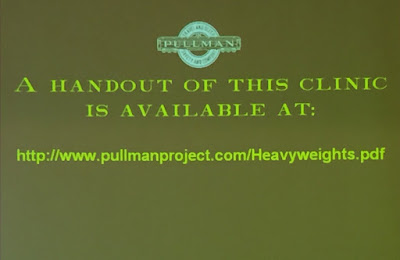 The clinic I probably liked best was Al Brown’s talk about kitbashing and scratchbuilding an “unusual tank car.” As often happens, it began with an intriguing prototype photo, and Al set out to try and model it. It ended up comprising a shortened Tichy tank with Tangent domes, a resin underframe from a Southern Car & Foundry kit, and a variety of details, including Owl Mountain elbow safety valves. I hope Al will publish his informative account of how all this came together. Here is the model (not yet lettered):

The prototype had had its original center dome removed, leaving the riveted collar, and was divided into two compartments with new domes. You can see that Al’s model captures this.
Lastly, I want to observe that even with chilly, windy weather, the magnificent ocean beach is still out there at the back of the hotel. Always worth at least a short stroll, even it you need a coat. 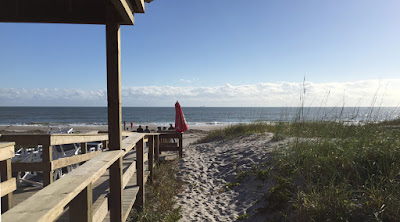 M own feeling this year is that it was among the very best Prototype Rails meetings I can remember, and I have only missed one of them since their inception. Comparisons aren’t too  meaningful, but in the past I have always said that Cocoa Beach is a close second to the former Naperville (now Chicagoland) meeting, if considered as a kind of “Freight Car National.” This year I pretty much think that Cocoa has caught up to Chicagoland. And what could be better? That means we have two great meetings concentrating on prototype modeling to choose from! If you’ve never been to one of them, I’m sure you would enjoy attending either one.
Tony Thompson
Posted by Tony Thompson at 10:25 AM