Should open-top loads be removable or not?

I have shown examples over the years in this blog of a wide variety of removable loads for open-top cars, and have long believed that wherever possible, loads ought to be made removable. The simple reason is so that a car can operate both loaded and empty, in the sequence of layout operating sessions. The first real challenge to that approach came from the group of really excellent open-top cars with permanent loads that I inherited from Richard Hendrickson (you can see a selection of these loads in this post: http://modelingthesp.blogspot.com/2015/06/richard-hendricksons-lumber-loads.html , as well as links to related posts).
But before I address “permanent” loads,  I should emphasize that the great majority of my open-top car loads are removable. Both for bulk materials like ballast, coal and ore, and multi-piece loads such as lumber, structural steel, or pipe, it is easy to design and build removable loads.
An example is pipe loads in gondolas (see the method of making them at: http://modelingthesp.blogspot.com/2012/01/open-car-loads-pipe-in-gondolas.html ). Shown below is one of the loads shown in that post, at Shumala on my layout. I mentioned lumber, too, and this photo also shows a removable load of lumber in a gondola. Lumber in gondolas actually represents pretty common SP practice — probably when there weren’t enough flat cars — as was often the case. 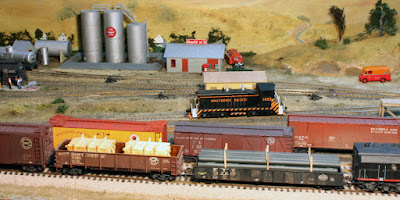 Some time back, I built a white metal Stewart kit for a Euclid scraper, and in preparation for using it as a load, showed the AAR loading diagram for that vehicle type on a flat car (that post is at: http://modelingthesp.blogspot.com/2016/05/vehicle-loading-on-flat-cars.html ). I then added the needed chocks to the scraper, and added a crate for spare parts, etc. It then looked like this:

Note that all load-restraint elements are attached to the vehicle, and are thus independent of the railcar; likewise the cleats on the crate. So when in action on the layout, this load can ride on any chosen flat car. The photo below shows it on an SP flat car in my layout town of Ballard.

But some loads have sufficiently complex tie-downs, or are sufficiently delicate, that they really have to be permanent. A good example is this model, given to me by Richard Hendrickson, of a load of automobile frames.

The frame rack, and all the frames, are such that it does not seem like a good idea to be inserting and removing them all the time from gondolas.
So I have come around to the idea that some of my open-top freight cars, with their permanent loads, can serve effectively on the layout without being capable of an empty move. That especially applies to cars like the Pere Marquette frame gondola just shown, because it will only operate in through trains on my Coast Route main line, not on my Santa Rosalia Branch.
I guess this acceptance of a few permanent loads does in turn open up the possibility that I can plan other permanent loads, even for freight cargoes on my branch — though I still prefer removable loads in most cases! I just won’t continue to insist on them for everything.
Tony Thompson
Posted by Tony Thompson at 6:20 AM