Last month, John Rogers organized an operating weekend for visiting operators, for layouts in and around Missoula, Montana (and one in Whitefish). This wasn’t really a formal ops weekend, so the name in the title of this post is unofficial. Seth Neumann and I from California were among those invited, and enjoyed our visit. The six layouts on which I operated all had impressive qualities, though naturally different from each other, and I will only be able to convey a hint of their character in this modest amount of space.
The first layout I operated at was Larry Brumback’s, modeling an area of Montana in which both the Milwaukee Road and Northern Pacific operate in close proximity. Larry is a skilled layout builder, and I really enjoyed working a town job in his scheme. Shown below is a view of one of the layout areas, where Milwaukee Road electric service operates under the overhead visible in the foreground, and NP power is visible at the engine terminal in the background. (You can click on the image to enlarge it if you wish.)

The next day we operated in the morning on Bob Estes’ layout. It is compact but interesting and challenging. One of the most striking thing at Bob’s layout is his effective use of background photographs to indicate industrial areas and also, of course, to expand the layout visually. As the photo below shows, Bob’s layout is primarily oriented to Northern Pacific, and is primarily set in the 1970s. 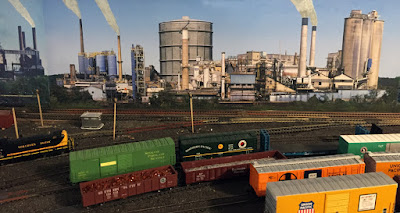 Our third visit was to the almost overwhelming layout built by Kirk Thompson. He has a separate building something like 65 feet long, for his representation of NP’s Mullen Pass. His usual operating sessions are modern-era, but he has the equipment to be able to operate a 1950s version also. (I would really enjoy being part of that one!) The very large layout space means that really long trains can be operated, and staging has to be commensurate with that — and it is! I shared a yard job with Travers Stavac in the early part of the session, but later was assigned to a mainline train headed over the pass. I managed to find a vantage point where I could show the entire train (empty oil cars) as it climbed toward the summit. Power here is Montana Link. I really admire the realism of Kirk’s scenery. 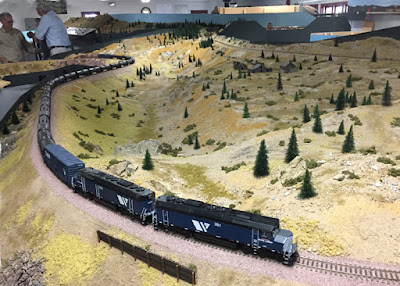 Next we took a full day to drive to Whitefish, operate on Jim Ruffing’s layout, and return. I knew Jim years ago when we both lived in Pittsburgh, PA, so it was a pleasure to see how Jim’s modeling is progressing. He has chosen to model Montana in 1969, as though the BN merger had occurred in 1968 – as it almost did. That means, of course, a thorough mix of NP, GN, CB&Q and SP&S motive power and rolling stock, an interesting and challenging modeling project. I shared the Whitefish Yard job, just one element of a very ambitious operating scheme. In the view below of this very large yard, our host and organizer, John Rogers, stands in the aisle. You can see also there is not only an upper deck, but an intermediate deck (or “mezzanine”) of staging. 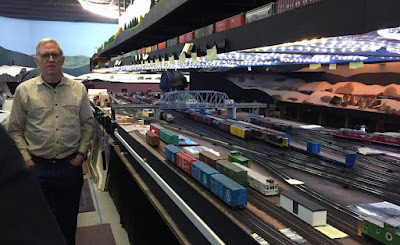 On the following day, we visited Dave Mitchell’s nice layout. Not overly large, it has excellent scenery, much of courtesy of skilled builder Larry Brumback. Again set in the modern era, and with several interesting switching challenges, we all enjoyed the chance to operate. I especially liked the touch of a displayed steam locomotive alongside the depot. 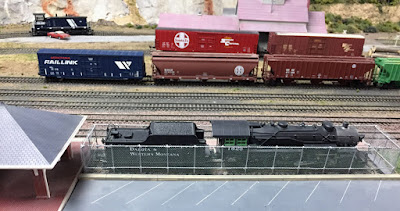 The town switching job I had on this layout was really fun and departure time came too soon for most of us.
The final layout on which I operated was Dave Heckeroth’s Milwaukee Road. Set in the late electric era, when most power was diesel, it is a nicely conceived and beautifully operating layout. I took the Missoula Yard job, an interesting and complex challenge, which included some industrial tasks. The biggest was the Intermountain Mill, handling all kinds of forest products. An overview of this industry is shown below, and you can also see the very clearly labeled and mapped control panel, with all turnouts powered from this point. Easy to understand and easy to operate. 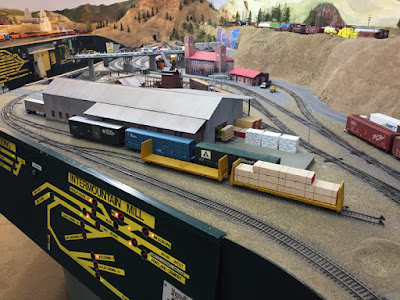 Dave also has a really interesting car movement system, and with his permission, I will devote a separate post to it in the near future.
This was a great weekend, in an area not usually even thought of in terms of operating layouts, but all six of these were well worth the visit, not just to see them, but to have a chance to dive into serious operating. Great fun — and warm thanks to John Rogers for organizing the event, and to all the layout hosts for their hospitality and terrific layouts!
Tony Thompson
Posted by Tony Thompson at 12:28 PM