I hosted the fifth operating session of 2018 on my layout on September 22 and 23. As always, a few features had been updated or added, and most of these were aimed at preparation for our regional operating weekend, BayRails, the eighth instance of which will take place in March 2019. (For information on this event, visit the website at: http://www.bayrails.com/ , and if you would like an invitation to attend, go to the page requesting same: http://www.bayrails.com/prereg.php .) The main site hasn’t yet been freshened up with all the new information for everything (in particular the new logo for 2019), but much of the relevant information for 2019 is in place.
My own  session included some refinements in use of the “fast clock,” not really “fast” in that it runs at 1:1, and in some of the switching sequences, along with some trackwork improvements. Most were minor, though a couple of them definitely improved operating performance. (I suppose it was inevitable that the opposite happened, too: a track segment that intermittently was electrically dead — more on that in a future post.)
The first day, September 22, the crew of four included Jim Providenza, Bryn Ekroot, Dave Houston, and Ray de Blieck. As usual, each crew started on one side of the layout, and switched sides halfway through. Shown below are Jim (at right) and Bryn, working at Ballard. 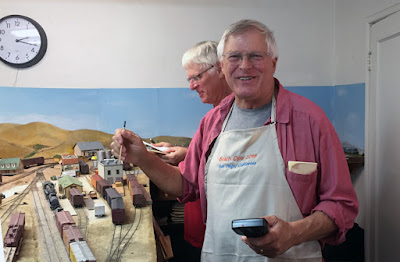 Meanwhile, Dave (at left) and Ray were doing the switching at Shumala. 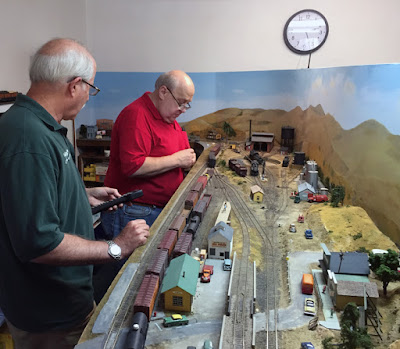 My neighbor, Joel Kaufman, is an N-scaler, and he came over to observe. He also brought his camera, and  took some nice photos of people operating. One of them is below, showing Ray obviously in deep concentration at Shumala. 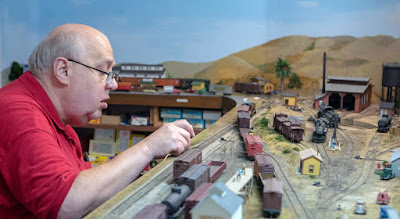 Another nice photo by Joel shows Jim taking advantage of his height to reach into the layout to uncouple a car.. 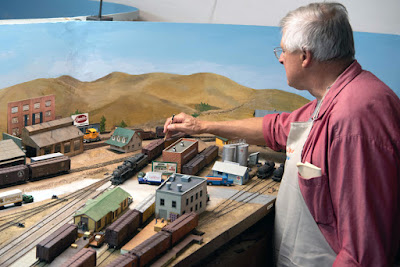 On Sunday, we had a last-minute cancellation due to illness, and Joel was kind enough to come over again for part of the session. He teamed up with Jon Schmidt, working at Ballard, as the session opened. Here are Joel (right) and Jon starting to work. 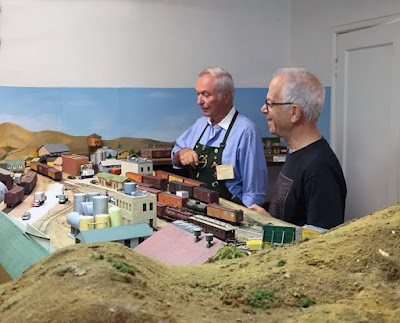 The other team on the 23rd was Ed Slintak and John Sutkus. The are shown below, with Ed at left, cleaning up the yard at Shumala. John is laughing because I told them to “look intelligent for the photo.” 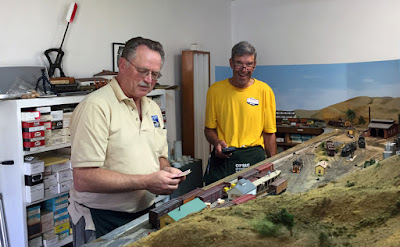 Overall, I would rate these as good sessions both days. My tweaks to the operating session plan worked as planned, and things mostly went smoothly. (Not quite everything, though, as I reported in my previous post: http://modelingthesp.blogspot.com/2018/09/lessons-learned.html . At least I learned, or re-learned, some lessons.) On balance, then, some good results that outweighed the disappointments.
Tony Thompson
Posted by Tony Thompson at 11:47 AM