I began this topic by showing a kit-built resin Sunshine tank car, almost completed except for its expansion dome. The dome supplied in the kit was the wrong diameter, and my first post about completing this kit showed how I came up with a dome to fit the opening in the car body (see that post at: http://modelingthesp.blogspot.com/2018/06/completing-sunshine-tank-car.html ). In the present post, I continue this project.
My first step, after the work in the previous post, was to bend grab irons for the dome sides, fitted to the spacing of the Tichy dome bolt heads. I used 0.010-inch brass wire for the grabs. Attaching these grabs with CA, I added the Tichy tank car detail parts (from their set No. 3007) for the safety valves and manway cover on the dome top. The new dome was now ready to paint.

There was no need to mask for painting, other than the general dome area, since everything else was black too. I sprayed the dome flat black, then added a coat of gloss for decaling.
Having painted the dome, I could proceed with the Sunshine kit decals for Rohm & Haas. Though no lettering drawing accompanied the decals in this kit, what was furnished was a color print of one of the prototype cars. I don’t know the photographer, nor the place and date of the photo,  but will include the image here as part of this Sunshine project. 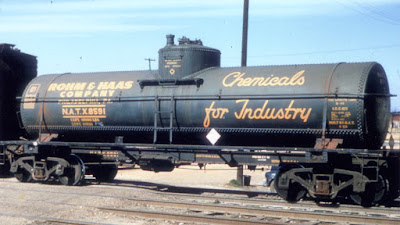 It was an interesting exercise to go from the decal sheet, to find each of the items of lettering on the photo, and of course vice versa: to go from a visible item on the prototype photo, to locate same on the decal sheet. Eventually I did find and apply all those various bits of lettering. Shown below is a photo of the model at this point, essentially ready for weathering.

Partly because of the somewhat flamboyant lettering, I decided not to weather this car too heavily, but just add some moderate dirt. Here it is at the unloading rack for Pacific Chemical Repackaging in the town of Ballard on my layout. 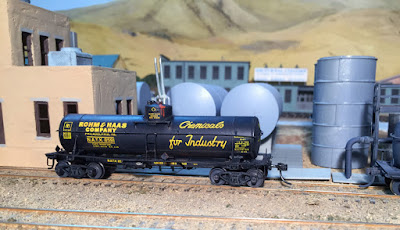 Though at first disturbing to realize a kit had a wrong-size part, it turned out to be a fun exercise to find a suitable new dome. Then it was straightforward to complete the work. And my general enthusiasm for tank cars is certainly being fed by this very nice General American car.
Tony Thompson
Posted by Tony Thompson at 12:25 PM