I have written a number of previous posts about restoring and upgrading older HO scale models, to an extent that I can operate them on my layout alongside newer (and usually significantly better) models. These have ranged from Athearn metal box cars, through Thomas Trains metal tank cars, and several other models of various kinds. You can readily find them by using “upgrade old model” as a search term in the search box at the right of this paragraph.
The one I am writing about today is a model I always had wanted to acquire as a young modeler, but never did: the Ulrich white-metal model of the “War Emergency” 52-foot gondola. Though lacking some details that would be expected today, it does have all the main dimensions and features of the prototype. Moreover, though it has cast-on sill steps and grab irons, it also has nice stamped sheet metal ends, permitting both sides of the end to have a proper appearance. Of course I know that Tichy now offers a kit for this car, a kit which results in a far better model. But I wanted to have one of the Ulrich versions also.
My opportunity arose when Chuck Hitchcock was selling his rolling stock, in connection with tearing down his layout. There was one of the Ulrich gondolas in the list, and I signed up to buy it immediately. This acquisition doubles my interest: not only is it the Ulrich model I had long wanted, but I have immense respect for Chuck and his accomplishments in, and contribution to, the hobby. I looked forward to this car becoming part of my car fleet.
Here is a photo of the model as it arrived from Chuck. Ii is intact in every respect, and an immediate candidate for service, so I looked to to see what changes I might want to make.

I realized right away that there is a problem with this model as built. It has the hand brake on the car end, but nearly all these “Emergency” cars had drop ends. That, of course, precludes mounting the hand brake on the moveable end. It is also has a pretty clunky white metal hand brake mechanism and wheel. I thought I could do better. 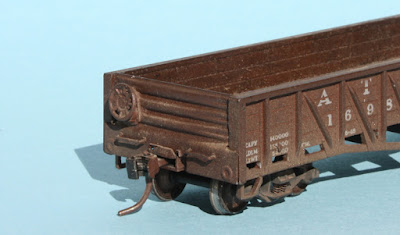 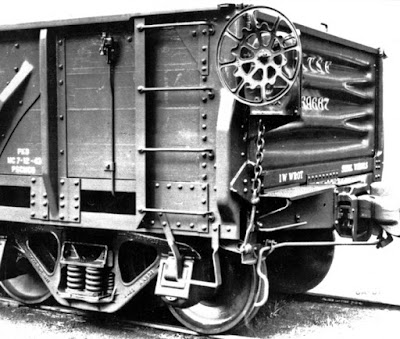 Note also that the Dreadnaught end is reversed, that is, that the major ribs or bulges face into the car. This was common on gondolas, as it was believed to be a stiffer end this way. Finally, there is a brake step, positioned level with the floor so it will not interfere with loads when the drop end is down.
You can see in the photo above that the brake wheel lies in a plane parallel to the car side. A view from the other side of the car shows that the mechanism was mounted to a flat plate. (You can click on the image to enlarge it if you like.) This flat plate is visible in the photo above, too, as a dark shadow below the brake mechanism.

(Both photos are from the Santa Fe, courtesy of the Richard Hendrickson collection.)
For those interested, there is considerable information available about both the “Emergency” gondolas as a whole, and about the Santa Fe cars of that type. For the former, an excellent article by Ed Hawkins, in Volume 28 of Railway Prototype Cyclopedia, both illustrates and tabulates all the “Emergency” gondola designs of World War II. For the latter, Richard Hendrickson provided detailed coverage in Santa Fe Open-Top Cars: Flat, Gondola and Hopper Cars 1902–1959, part of the Santa Fe Rolling Stock Reference Series, Volume 7, published by the Santa Fe Railway Historical and Modeling Society, 2009.
My modeling choices to upgrade this model began with a decision to replace the original Ulrich hand brake parts with a better Ajax mechanism, and a good wheel (note how lacy is the prototype wheel!). I will return to that modeling process, and other detail work, in a future post.
Tony Thompson
Posted by Tony Thompson at 10:17 AM