Last week was the 25th renewal of the Railroad Prototype Modelers (RPM) meet, initiated by Martin Lofton of Sunshine Models back in 1994. Held for many years in Naperville, Illinois, it is now held a few hundred yards away, over the line into the town of Lisle, and is becoming known as the “Chicagoland” meeting, perhaps a better name for attendees from outside the area. This has for most of its existence been known to many as the “Freight Car National,” and deservedly so, as the emphasis continues to be on freight car modeling. Shown below is the cover from this year’s program. 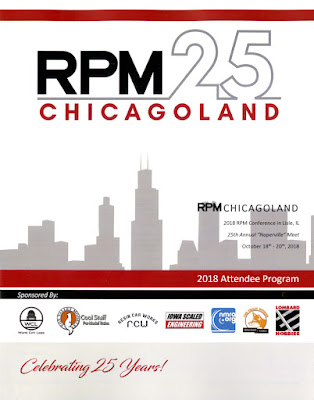 After Martin Lofton passed away, this meeting languished for awhile, but under the direction of Mike Skibbe it is now thriving.
As always, there was an excellent clinic program, an extensive vendor presence in the hotel ballroom (accompanied by the fine HO and N scale Mod-U-Trak layouts), and a considerable model display. We also had the now-traditional Friends of the Freight Car dinner, part of which was a recognition for Tricia Lofton, Martin’s widow, and long the organizing and registration presence at the meeting when Martin was in charge. It was great to have her at the meeting, renew acquaintance, and have a chance to chat.
The vendor tables were always busy if no clinic was in progress. Ted Schepf’s massive inventory was welcome, as always, with so much to browse through, and a number of manufacturers were drawing crowds, notably Pierre Oliver’s Yarmouth Model Works, with several new kits. At times one had to wait a turn to get up to a popular table. 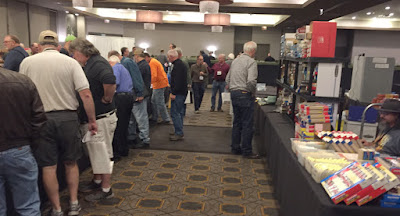 As is often the case at this event, Tony Koester gave one of his fine presentations, this one on “Realistic Operation,” a subject that never gets old. And though many of us have read enough of Tony’s writings to be familiar with most of the ideas, he always presents a talk in a way that holds your attention. In the photo below, he is talking about having places for the dispatcher and operators to do their work. Obviously Tony’s complexion is colored by the slide being projected, so don’t become concerned about his health on the basis of this view. 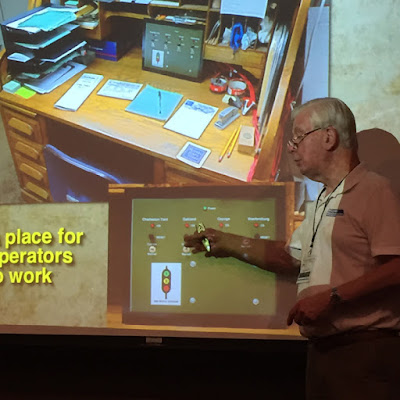 There were some other talks of interest, and I intend to return to at least one of them in a future post.
Among the models I especially liked this year was an ART car by Jonathan Pansius, modified from a Westerfield kit with a new roof and ice hatches, and lettered for a 1930 appearance. (During the 1928–1931 period, ART cars had no initials above the car number, as Jon’s model shows; this is amply explained in the new book, American Refrigerator Transit, by Maher, Michels and Semon, Signature Press, and yes, my opinion on this is far from neutral, as I’m a partner in Signature Press.)

Another car I liked was the one shown below, by Chris Vanko. Chris gave an excellent talk about weathering using oil paints and Pan Pastels, and this car is a product of that. The car is an InterMountain “Emergency” box car, with modifications to match the Wabash prototype.

I have attended nearly every one of the 25 renewals of this event (missing the first one because I was in the process of moving to California), and have always found them to be outstanding meetings, among the best there is for freight car enthusiasts. I look forward to more of them in the future.
Tony Thompson
Posted by Tony Thompson at 8:05 AM