Way back in 2004, Kalmbach Books initiated a series of volumes entitled The Model Railroader’s Guide to Industries Along the Tracks, usually just referred by the last four words of the title, or by IATT.  These books were authored by Jeff Wilson, who did a really excellent job of providing brief but well-directed summaries of rail-served industries. I mentioned them in a prior blog post, which actually served as a handout link for a talk I was giving over the lat year, about railroad traffic (you can visit that post at this link: https://modelingthesp.blogspot.com/2018/01/handout-for-traffic-talk.html ).
Eventually there were four of these books, each one covering six industries in 88 pages total. Given the need for front and back matter in a book, it’s evident that each industry could only receive a dozen or so pages of coverage, and given that the books were profusely (and appropriately) illustrated, text was necessarily brief. I show below the covers of these four books.

All but the first of these is still in print at Kalmbach Publishing, or was when I checked recently.
In that previous post (link given in the first paragraph, above), there is a list of the six industries in each volume, along with a fairly extensive bibliography of sources of information about traffic topics.
Now the topics of industries are being revisited b Kalmbach, very appropriately, I think, in expanding upon what was in the earlier books. The new series has the title, Guide to Industries Series. The books continue to be well authored by Jeff Wilson. The one I’m commenting on today covers a subject I know well, from extensive research when writing the PFE book (Pacific Fruit Express, 2nd Edition, Signature Press, 2000). This book is about the produce business. 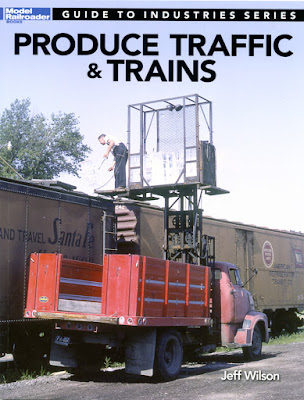 This is not only a comprehensive and accurate book, but contains many excellent photos. One of Jeff Wilson’s strengths is his photo choice (aided, of course, by the extensive Kalmbach photo collection), and it is a major contributor to the quality of these books.
One thing I especially like in this treatment is that it contains a full chapter on harvesting and packing of produce. This topic is something often omitted in presenting the railroad side of this business, but it is covered well here. In fact, one of my favorite photos in the book is in this chapter (it’s from the Library of Congress) . 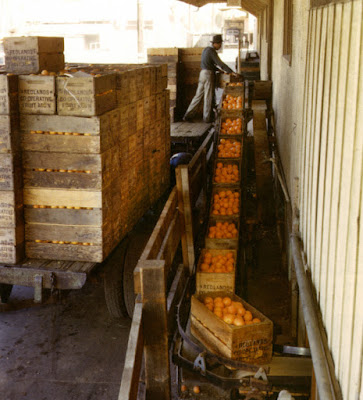 The photo depicts field boxes arriving on a flatbed truck at a packing house in Redlands, California. These are the boxes filled by field hands who picked the fruit, and are not the final shipping boxes that will go into refrigerator cars. The field boxes, of course, will go right back into the orchards for the next load. As with so much on this topic, modelers are often unaware of the role of field boxes.
The book also has a fine chapter on the various owners of the major refrigerator car fleets, covers the operation of perishable trains nicely, and concludes with a very appropriate chapter on produce terminals and the destinations of the cargoes. All told, another fine effort from Jeff Wilson, and as I have said before, kudoes to Kalmbach for continuing this very useful series of books.
Tony Thompson
Posted by Tony Thompson at 8:35 AM