I am not generally a huge fan of tourist train rides, partly because railroad museums often provide train rides that are pretty darn short. I realize that the 99.5 percent of the general public that is neither railfan nor modeling oriented wants it that way, and I accept that the museums have to cater to the bulk of their audience. But in any event, though I do enjoy them from time to time, it would be fair to say that I would usually just as soon pass on tourist trains.
That said, there are occasions when it is fun and even interesting to take a tourist train. I recently did such a ride, on the California Western Railroad, westward out of Willits, California. The Cal Western or CWR was for many years a serious lumber operation, originally carrying redwood logs from the mountains to the large Union Lumber mill at Fort Bragg on the Pacific coast, and also bringing finished lumber from Fort Bragg over the coast range to Willits for interchange with the Northwestern Pacific of the SP. The CWR in those days was actually a division of Union Lumber.
But closure of the Fort Bragg mill left the Cal Western with little to do beyond its existing tourist operations. These have been in place for decades, originally using an ancient Mack railbus. Because the railbus had smelly fumes, the nickname became the “Skunk Train,” and eventually that name became embedded in the Cal Western’s publicity, as it remains today. The logo, as included on the Wikipedia entry for the California Western, is shown below. As the logo suggests, a variety of motive power, steam and diesel, has been used to pull passenger cars, though one old bus, CWR’s M100, still runs.

The occasion for my taking a ride was a fund-raiser for the Mendocino Land Trust. The trip was to include quite a nice lunch in the middle of the trip. Shown before departure at the former NWP depot in Willits is the train, two conventional coaches and a roofed open-side car. 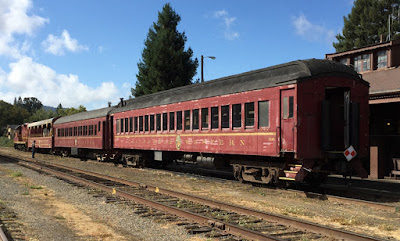 We rode from Willits up to a new picnic site west of the summit of the range, a place named Crowley. Formerly a maintenance location, a meadow was created by cutting brush and trees and mowing the weeds. In this photo, the musicians for the lunchtime entertainment are detraining. The information tent for Mendocino Land Trust can be seen at left. 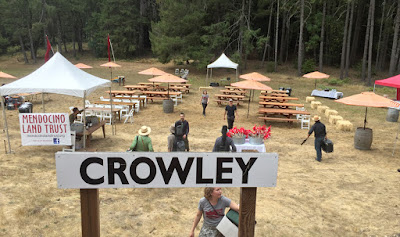 The hot lunch (along with extensive hors d’oeuvres) was a gigantic paella, prepared in the shallow pan you see in the photo below. The smaller dish in the foreground is a vegetarian paella. 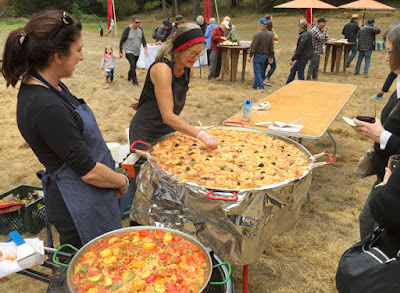 Our train remained on the main line during lunch. Here you see the power, a modified GP9, reportedly former SP GP9E no. 3411, now CWR 64.

The trip was a fairly brief train ride (not a lot over an hour each way), and an excellent lunch selection which included complimentary wine or beer (the latter donated by North Coast Brewing Company of Fort Bragg). Moreover, our ticket prices included a nice donation to the Mendocino Land Trust, which has been instrumental in preserving old-growth redwoods in the Coast Range, including a tract surrounding some of the California Western trackage. We were more than happy to make that donation. So there are times that tourist trains can be a worthwhile experience, and this was certainly one of them.
Tony Thompson
Posted by Tony Thompson at 11:14 AM

Email ThisBlogThis!Share to TwitterShare to FacebookShare to Pinterest
Labels: Railfanning