Setting up an operating session, Part 4

As my title indicates, I have written several posts previously about how I set up an operating session. What is needed begins with basic ideas about how your layout can or should operate (relevance of mainline trains, amounts of switching, etc.), some things I discussed in the first of these posts on setting up (see it at this link: http://modelingthesp.blogspot.com/2013/09/setting-up-operating-session.html ). I amplified those comments with more specifics, especially about timetable construction and use, in a second post (it can be found at: http://modelingthesp.blogspot.com/2013/10/setting-up-operating-session-creating.html ). Then in a third post, I went into my methods of evaluating what switching is needed to follow a particular session (that one is at: http://modelingthesp.blogspot.com/2015/06/how-i-set-up-operating-session.html ). As I described, I begin by walking around the layout and taking some notes.
The present post is to provide more details to follow that third post. My “walking around” assessment process involves, basically, three kinds of industries on the layout. First would be the really busy industries, the two vegetable packing houses and the wholesale grocer, which work year-round and often have multiple cars switched per session. I can just continue these car cycles in any future session.
Second, there are the industries that are not as busy, and typically are switched in every other session. So for these, I know to plan for replacing or removing cars that were static in the session just ended, or to recognize cars that were just spotted in the recent session, and will not move in the next session.
Finally, there are the places that only occasionally are switched. These are usually empty (per diem charges mean that cars would simply not sit on sidings for extended times), and I have a rough rotation scheme for these places, which I can consult to see if the following session will involve these sidings.
All the foregoing assessments are identifying cars that will be switched in the following session, and places that will need new cars in the next session. But there are also cars departing the layout, either that have already gone to staging in the Guadalupe Local, or have been spotted for pickup by trains on the main line. Most of these will be departing by “0-5-0” from the layout, and returned to car storage.
Then how do I go about selecting new cars? One of my principles is to try and include cars from the biggest U.S. railroad fleets in every session, not slavishly but as a guideline or goal. Shown below is a graph of the size of U.S. railroad fleets in 1950, with hopper, ore and ballast cars removed (since they moved far less freely in interchange than other car types). I showed this graph, and described its background, in one of my columns in Model Railroad Hobbyist, for the issue of December 2011 (you can read or download this issue for free at their website www.mrhmag.com ). 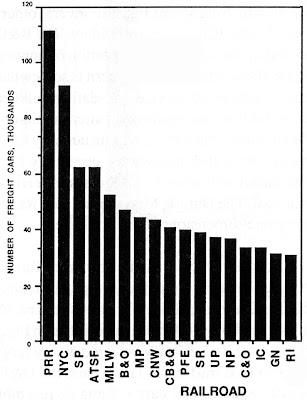 The implication of using a graph like this is acceptance of the Gilbert-Nelson hypothesis, an idea described in that MRH column, if you’re not familiar with it. Note in this graph that PFE has been separated from SP and UP, mainly because of its size. I do try to include cars from the largest five roads (other than SP, since of course it’s the home road for my layout) in every session, and also look for chances to include cars from the remainder of those shown in the graph, whenever I can.
I have explored the quantitative aspects of car fleets and car selection in prior posts, and will just provide links to a few of them here. One of them addressed the problem of how many home-road cars a layout ought to have (see that post at: http://modelingthesp.blogspot.com/2012/12/choosing-model-car-fleet-some-numbers.html ). Then I went further afield and tried to figure out, for my layout modeling the SP Coast Route in 1953, how many and what kind of foreign cars would be expected to be present (that post can be found at: http://modelingthesp.blogspot.com/2012/12/choosing-model-car-fleet-numbers-part-2.html ). All this analysis is only to provide guideposts in operating my layout, certainly not to offer any kind of rules or requirements.
Another resource I draw upon in choosing new cars for upcoming operating sessions is my compilation of a “Master Roster.” I described this in moderate detail in a previous post, so won’t go further into it here (you can read that post at: http://modelingthesp.blogspot.com/2017/07/waybills-part-59-more-on-op-session-set.html ). But the key information available in that Roster is previous use of each car. That enables me to avoid repeating familiar cars, and making sure less-used cars are employed too. In effect, I want the whole car fleet to be exercised over a span of operating sessions.
This may all sound rather formal and even quantitative, and perhaps all that background analysis can be described that way. But the analysis is definitely background, and is by no means “up front” in setting up sessions. So as I use this approach, I have found it quite flexible, within the guidelines I have set for myself. My experience is that I am rarely if ever constrained in car choices for operating sessions, though of course receiving guidance from the principles. At the same time, I like having the confidence that there is a prototype background to my car selections. And of course, that’s the way I designed it.
Tony Thompson
Posted by Tony Thompson at 10:42 AM