I realize that to some, my post title today may sound like one of those “life coaching” subjects. Not that I haven’t learned a few life lessons during my years on the planet. But I mean far narrower kinds of lessons, relating to the hobby and the layout. This was stimulated by one of the visiting operators on my layout his past weekend, asking me about “lessons learned” with my layout. I was able to give a quick answer about a few things I had learned to always check before turning the layout over to an operating session.
But it turns out it was a better question than I first thought, because I found myself reflecting on it, well after the original question and answer. So I was impelled to jot down a few of my thoughts as I reflected. Those comments are below. There is an entirely separate topic here, of lessons learned about layout design, but I will postpone that to a future post.
A first answer that certainly came to light this weekend, when a few of the freight cars in the session acted up, is that what I call the “rookie tests” may not be enough. (For more about what those tests are, you may like to read my post on the topic, which is at; http://modelingthesp.blogspot.com/2018/07/the-rookie-test.html .) Those tests effectively are aimed at correcting all the major issues which may crop up with a freight car. But they aren’t (necessarily) enough.
For example, a freight car may have coupler height which matches the Kadee gauge. But if it is a “hair” high, and especially when mated with a smaller-head coupler which may be a hair low, there may still be a mismatch, as shown below in an example of a Kadee #5 with a #58. As long as your layout doesn’t have excessive vertical curves, this is okay, but is worth minimizing wherever you can. 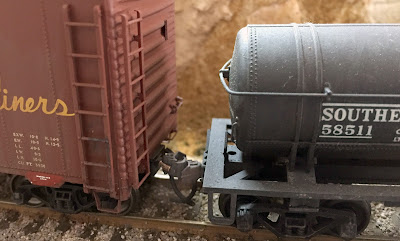 This one might not cause trouble, but it is worth re-checking both cars to bring the coupler heights as close to standard as possible.
What one wants to happen, whether couplers are identical in head size or not, is for them to mate just as fully as possible. The photo below shows a good situation. 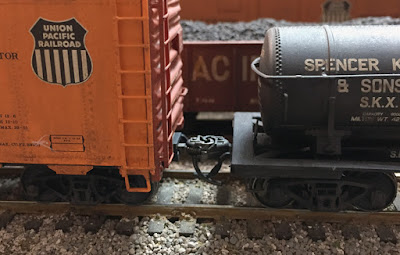 What’s my point here? Doesn’t the “rookie test” include coupler height? Yes, so the point here is that “close” may not be good enough, because couplers only off by a “hair,” but one is high and one low, can still cause problems when they happen to mate up. And as the saying goes, don’t ask me how I know.
Other events which served to remind me of an old truth were that a few couplers pulled out of pockets, or had box lids sag. Invariably these occur in coupler boxes not secured by a screw, but with some kind of friction fit. I just hope the manufacturers who chose these shortcuts can somehow hear the strings of four-letter words sent in their direction.
But the onus is on me to replace/rebuild/redesign those kinds of coupler boxes, and fix the problem. I found I’ve got more of them to do. Does this mean you have to be kind of obsessive about this? Well, actually, I’m afraid the answer is “yes.”
The irony here is that I usually (with emphasis on “usually”) do discard friction-lid coupler boxes and replace with a screwed-down lid. But sometimes I’ve cut a corner, built the car as supplied, and so eventually have to go back and fix my omission. That can only be called a “lesson re-learned.” I can’t resist showing a photo of the outcome, when a friction box lid allowed the coupler to droop and its trip pin to wedge into a switch frog. (You can click on the image to enlarge it, if the problem isn’t immediately obvious.) 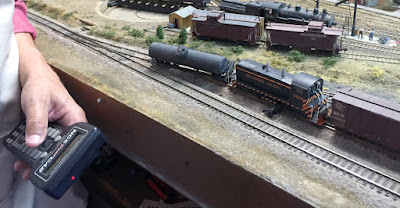 This is not how we want operations to go.
Lastly, my friend Jim Providenza was here for one of the op sessions, and he reminded me of an old layout truth. No matter how old a layout feature may be, no matter how dependable or how carefully built, nevertheless, as Jim puts it, “nothing is gold.” Here again, this old truth was demonstrated again this weekend where a long-installed and dependable stretch of track became electrically dead — but only intermittently. I will just have to dig into that one and figure out what’s going on.
Jim’s principle also applies, of course, to locomotives, freight cars, electronics of all kinds, and even scenery.  Might be good to make up a plaque and hang it on the wall in the layout room. That would be a plaque, of course, that reads “nothing is gold.” A friend when I lived in Pittsburgh had a similar saying, when it came to hunting down gremlins on the layout: “Trust nothing. Suspect everything.”
So really, I kind of knew these lessons, and was only RE-learning them on the layout, but yes, those are among the things I learned on the layout last weekend.
Tony Thompson
Posted by Tony Thompson at 4:41 PM